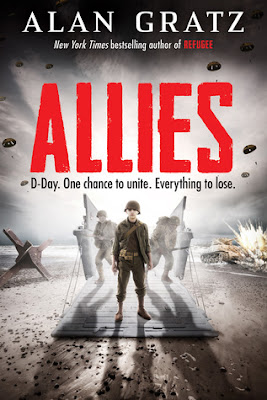 Beginning just before dawn on June 6th, 1944 and ending close to midnight on the same day, Gratz weaves together six unrelated perspectives that bring the D-Day landings to life in all its chaotic, grim reality.

Private Dee Carpenter is a 16-year-old who lied about his age to get into the Army, but since they needed soldiers, the Army looked the other way. Dee and Sid Jacobstein became friends right from the start in boot camp. But Dee wonders what Sid, a Jewish American, would think if he found out Dee's truth.

Samira Zidane, 11, and  her mother Kenza are French Algerians working in the French Resistance. Six hours before the invasion begins, mother and daughter are on their way to deliver an important message about the invasion to the Resistance when Kenza is arrested and taken into custody by the Nazis. Samira delivers the message, and is determined to find and help her mother escape her captors.

James McKay, 19 and Sam Tremblay, a Cree Indian, are in the 1st Canadian Parachute Battalion and about to jump into the midst of the invasion. James decided to join the army after his home town of Winnipeg staged a mock Nazi invasion. Now, though, he is wondering what he is doing parachuting into France on D-Day. His pal Sam, despite being promoted to Lance Corporal, still faces insults and microaggressions as a First Person from the other men, who are white.

Bill Richards, 19, from Liverpool, England is a Private in the Royal Dragoons, and a tank driver just like his dad was in WWI. Bill was named after and is obsessed with William the Conquerer and determined to get to get to Bayeux, France to see the famous Bayeux Tapestry. But he was also obsessed with getting to Amiens, France where his father had carved "Jack Richards was here 1918" on a stone, and Bill was determined to add his name underneath.

Corporal Henry Allen, 20, is an African American medic in the 320th Barrage Balloon Battalion. And even though the United States military is segregated, Henry is on Omaha Beach, risking his life, dodging bullets and racist comments to save the lives of the mostly white soldiers shot and injured as the D-Day landings happen.

Monique Marchand, a 13-year-old French girl with an interest in medicine, was swimming with friends on Normandy Beach the day before the D-Day and ended up in the swimming hut on the beach during the invasion because of a forgotten bathing suit. When she notices an injured soldier, she leaves the hut to help him and that's when she meets Dorothy Powell, an American journalist for Collier's Magazine, there to write about the invasion.

There's not much more to say about this incredible book without giving too much away. Some of the people will live to see the end of the day, others won't, but all contribute to giving a broad view of this important day and what it was like. And Gratz doesn't hold back, so just know this is not a book for the faint at heart.

One of the things I really liked was how Gratz divided the day into the names of different operations. He explains in the back matter that some of the operation names are real, and some he made up to fit the story. Either way, it gives the reader a real sense of time passing and what might have happened. But be sure to read the Back Matter where you will find so much more information.

Gratz also includes a map to give readers a sense of place, since some of the landing units ended up in the wrong beach in all the chaos.
WOW! Allies is a great work of historical fiction by a great storyteller. I found myself spellbound from the first word of Allies to the last, but then again, I had the same experience with Gratz's other books, namely Prisoner 1065, Refugee, and Grenade.

This book is recommended for readers age 9+
Thank you, Scholastic Press, for providing me with a copy of this book.
Posted by Alex at 4:48 PM