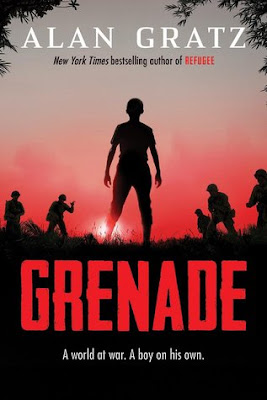 It's April 1, 1945 and for 13-year-old Hideki Kaneshiro, the war has become very real when his Okinawan school is bombed by offshore American battleships. Hideki and the other students of the Blood and Iron Student Corp are immediately given two grenades, one with which to kill as many Americans as possible and one with which to kill themselves, and sent on their way to fight.

On an American ship heading to Okinawa as part of a large invasion force of GIs and Marines, is Private Ray Majors, just a boy himself really, having enlisted in the Marines as soon as he turned 18 to get away from an abusive father who had fought in WWI and never really recovered.

Hideki is a gentle soul, an Okinawan who loves and honors his family and his ancestors, and who has learned to look at the world with a photographer's eye, thanks to the Japanese photographer, Lieutenant Tanaka. It was the Lieutenant's job to take pictures of Okinawa for generals to formulate their defense. Hideki became his assistant and Lieutenant Tanaka showed him how to frame a picture with his fingers in a rectangle and to ask what story the picture will tell, not just in the moment, but before and after the photograph was taken.

Ray is also a gentle soul who doesn't like the idea of killing anyone, but who knows that in war it is kill or be killed. As the Americans move inland after arriving in Okinawa, Ray begins to experience mixed feelings about the war. And although he has studied the brochure they were given detailing the difference between native Okinawans and the Japanese, and learning a few Japanese phrases, the other men in his unit don't really care about the difference, killing anyone who looks like they could be Asian. After facing his first kill or be killed experience, Ray begins to collect the photos of fallen Japanese soldiers and Okinawan people who have been killed.

As Ray and the other Marines move inland, Hideki moves towards the coast hoping to find his older sister, Kimiko. Despite being a fifth-year student, Kimiko was sent south work as a nurse in the southern part of Okinawa. Inevitably, along the way, Hideki and Ray meet and as you might expect, the outcome is disastrous, but far from the end of their story.

Grenade is an action packed novel told from a duel third-person point of view. The chapters alternate between Ray and Hideki and are separated into two parts - before and after Ray and Hideki's fateful meeting. Gratz places these two poignantly drawn, sensitive characters in the midst of the last battle in WWII, the Battle of Okinawa, code named Love Day, and shows his readers the brutal cost of war not just in the lives of soldiers but also in the lives of innocent Okinawan families caught in a war they didn't want to be part of, and in the destruction of their farms and cities, and their cultural and religious objects and landmarks.

But in the end, Gratz also gives readers a lens through which they can find hope and redemption in the midst of war by introducing mabui, a concept of the Ryukyuan religion. Mabui is said to be the essence of the self, which is transferable from person to person, and can also found in a person's likeness, such as photos and drawings. Mabui found photographs plays a very important part in Grenade and ultimately, these photos tell a very potent story about war and the destruction of everything in its path, but also of the strength and endurance of the human spirit.

Some of Gratz' descriptions may be too graphic for sensitive readers, and there is a Note to the Reader in large letters that the book contains terminology used in WWII in order to accurately reflect this historical period. There is also a helpful map of Okinawa in 1945 showing where places in the book are located.

Grenade is a powerful book that successfully interrogates themes of loss, abandonment, and fear, as well as change, family, hope, and survival, and should appeal to readers who like WWII fiction, historical fiction, or just like a good book.

This book is recommended for readers age 10+
This book was an ARC received from the publisher, Scholastic Press
Posted by Alex at 10:49 AM