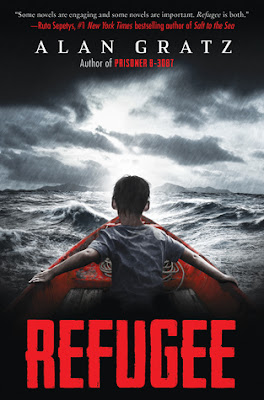 In Refugee, Alan Gratz has seamlessly woven together the stories of three refugee children and their families from different time periods and different places in the world and brought their harrowing experiences together as each flees their homeland in the hope of finding safety and freedom elsewhere.

On Kristallnacht in 1938 Berlin, Nazis enter and destroy contents of the home of the Landau family, terrorizing Josef, 12, his younger sister Ruth, his mother, and arresting his father, Arron. When his father finally returns home, he is a broken man after spending time in Dachau. Luckily, the Landau family has secured tickets and the needed visas to emigrate to Cuba.

On board the MS St. Louis, a luxury passenger ocean liner, the Jews fleeing Nazi Germany are treated well all the way across the Atlantic, but for Josef, the trip also brings stress. His father refuses to leave their cabin, insisting it is all a Nazi trick to send them to a concentration camp. When Josef turns 13 on the trip, he is able to make his Bar Mitzvah with the help of other passengers and ship’s crew. It would have been wonderful for Josef, if only his father could be at his side.

When the ship reaches Cuba, it is held offshore for what feels like endless days. Then comes the news that Cuba has cancelled all visas and ordered the St. Louis to leave Cuban waters. The ship sails to the US, where the passengers are also refused entry. But if no country will take this ship full of Jewish refugees, the only recourse is to return to Germany and certain death.

For Isabel, 11, living in Fidel Castro’s communist Cuba, immigrating to the United States, el norte, is only an impossible dream. That is, until 1994, when Castro announces that anyone who wishes to leave Cuba would not be stopped. Then, Isabel discovers that her best friend Iván’s father has been secretly building a boat to travel the 90 miles to the Florida coast with his family.

Isabel is determined to go with them when her Papi is threatened with imprisonment by the Cuban police. Discovering that there is no gasoline for the escape boat, Isabel sells her beloved trumpet for what they need. In the middle of the night, two families, 9 people in all, pile into the boat, including Isabel’s pregnant mother, and take off for el norte, and hopefully leaving their homes in Havana behind.

Fleeing the the US isn’t as easy a just enough gasoline, there is also the “wet foot, dry foot” policy. If you make it to the beach, you can stay, but if they catch you still in water, you are sent back to Cuba. Everything goes well for a short time, but then the trip begins to run into all kinds of problems and el norte seems even further away than before. Will they all make it before their boat sinks or the US Coast Guard finds them?

For Mahmoud Bishara,12, life in Aleppo, Syria in 2015 means trying to make himself invisible and making sure his younger brother Waleed is safe. But when the building the Bishara’s live in is hit and destroyed by a missile attack, the family knows it is time to leave Syria with its violent civil war behind and try to find refuge in Germany.

Starting out in a Mercedes, and heading to Turkey, the Bishara’s have food, money and cell phones, but are soon caught in the cross hairs of fighting between Sunni and Shia Muslims once again, losing most of what they are carrying, including the car. Luckily, they manage to keep a cell phone. They finally make it to the border town of Kilis, Turkey by walking, and where Mahmoud’s father finds a ride to Izmir, Turkey and the possibility of a ferry to Greece. But they also discover that there are people along the way who will do anything to take advantage of the plight of desperate Syrian refugees in a country where they are not welcomed.

After waiting days for a ferry to arrive, they finally board an overly crowded, not very sea worthy  boat. But when a storm hits, they are thrown overboard into an angry sea, where Mahmoud must make a heartrending decision in order to try to save at least one person in his family.

Each of these stories are heartbreaking and harrowing to read and really bring home what it is like to be a refugee in a world that just doesn’t want you. Gratz draws out the tension by telling the stories of Josef, Isabel, and Mahmoud in alternating chapters, each chapter ending in a bit of a cliff hanger, not for the sake of drama, but to emphasize the level and frequency of danger that is faced by refugees.

And though their stories are separated by time and place, Gratz manages to highlight the universal similarities refugees faced in the 20th and 21st centuries. Though each protagonist stands on the cusp of adulthood, they all must take responsibility and make hard decisions that impact their families and the outcome of their flight when the adults around them are incapable of doing it.

Readers can trace the route Josef, Isabel, and Mahmoud traveled to their final destinations with the maps found at the back of the book (and I continuously referred to them while reading), and please read the Author’s Note for more information about these young heroes.

Facing hardship, trauma, loss, hunger, and invisibility, the stories of Josef, Isabel, and Mahmoud form a poignant look at life on the run. But ultimately, each one gives us reason to hope.

A useful discussion guide from the publisher can be found HERE

This book is recommended for readers age 10+
This book was an ARC sent to me by the publisher, Scholastic Press