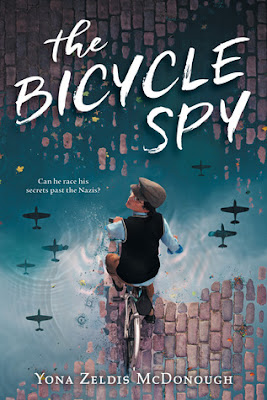 It's November 1942, and Marcel Christophe, 12, has one dream - to ride in the famous bike race the Tour de France when he gets older.  For now, though, he must be content with practicing on his bicycle, riding to school and delivering bread to customers of his parents' bakery.  The race has been cancelled since the Nazis began occupying northern France in 1940, but Marcel knows it will be back after the war is over.  Now, however, the Nazis have also invaded the southern part of France where Marcel lives, making things difficult for everyone.  Not only are there shortages and rationing, but soldiers are stopping people to question where they are going and why.

The first time Marcel is stopped by a guard, his parents want to know all about it.  The next time they ask him to deliver bread to his aunt and uncle. his mother gives him some pain d'epice (gingerbread) to offer to the guard if he is stopped again.  Sure enough, the guard is there, and more than willing to let Marcel go by in exchange for the gingerbread.  Afterwards, Marcel decides to slice off a little of the bread to eat and discovers a note written by his father baked into it.  Suddenly, Marcel realizes he has been making a lot more bread deliveries these past few weeks, but why?  Stunned, Marcel realizes his parents are in the resistance and his is delivering messages for them.  Realizing the danger for everyone concerned, he decides to keep this to himself.

Meanwhile, at school, there is a new girl named Delphine Gilette  who is not only a very good student, but knows all about the Tour de France thanks to her brother and father's interest in the race. It doesn't take long before she and Marcel become fast friends, riding their bikes together, playing together and doing homework.  But just as Marcel has a secret, so does Delphine and when a boy in their class discovers a revealing photograph in her school satchel, her secret is exposed.  Delphine and her family are Jews from northern France who had traveled to southern France using forged papers when it was still free of Nazis soldiers.  Now, they will need new papers to try to get out of France to safely.

Marcel realizes he must confess to his parents that he knows that they are part of the resistance in order to help his friend escape France.  Luckily, his parents are more than willing to help, but they must send Marcel to a fellow resistance contact on his bicycle.  What should have been a simple trip, however, is anything but.  Everything that could go wrong does, including a flat tire that forces Marcel to trade his beloved bike for a beat up replacement that will take him further from home than he has ever been seeking the right people who can help Delphine and her family get out of France.

But the Nazis have already begun rounding up all the Jews in the area.  Will Marcel make it to his final destination and home again before Delphine and her parents are found and deported?

At first I thought The Bicycle Spy was not going to be a very interesting story, but that quickly changed and it proved to be a very accessible, exciting narrative of courage and friendship.  The language is direct and clear, and terms that might be unfamiliar to readers are defined in the glossary at the back of the book. Told in the third person, Marcel's story unfolds simply and believably.  I say believably because after reading so many stories about the courageous acts of children to help other, I can easily see how this could have happened.

As a protagonist, Marcel is a typical, unassuming 12 year old, who is happy riding his bike, racing his friends, and dreaming about his big Tour de France wins, yet he also seems surprised by his own bravery.  Delphine, a girl who has had to move around because of the Nazis, feels a little more down to earth but the reader will definitely feel her underlying anxiety, even when she appears to be so confident.

I really liked the way Yona Zeldis McDonough managed to keep the tension building slowly right up to the end of the novel, making it a deceptively simple, thought provoking story.  I also like the way she incorporated information about the Nazi occupation of France, WWII and even the Tour de France so easily that it felt like a natural part of the narrative, and not like she was teaching her readers a lesson.

McDonough has also included a short history of WWII, as well as a Timeline, a short history of the Tour de France (something I found very interesting since all I know about this race has to do with the disgraced Lance Armstrong) and books for further reading.

There is much in The Bicycle Spy that will appeal to young readers and for that reason, I highly recommend it to them.

This book is recommended for readers age 8+
This book was sent to me by the publisher, Scholastic Press
Posted by Alex at 8:29 AM