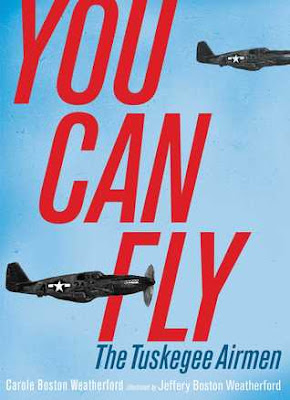 What is it like to be a black man and to want something so badly you are willing to put up with racial discrimination, willing to buck the system and prove those who think you lack the intelligence to fly a plane wrong, so very wrong?  What was it like to become a Tuskegee Airman?

In a series of thirty-three poems, Carole Boston Weatherford answers these questions, writing the history of this distinguished band of brothers, the African American pilots who fought for victory on two fronts, one in Europe against Nazism and one at home against racism.

Using a composite "you" that not only addresses the Tuskegee airmen as a whole, but also and immediately invites the reader into their midst, Weatherford begins her history-in-verse, capturing the big and small personal and shared moments and events that mark this period in America.

Weatherford skillfully orchestrates this complex history, beginning with a young boy's desire to fly to becoming one of 2,000 black pilots in the 1938 newly formed Civilian Pilot Training Program - 2,000 out of a total of 400,00 - sent to Tuskegee Institute. Training is rigorous, cadets knowing that

She then takes the reader along as the men learn and practice their new skills, even as they must still deal with racism and Jim Crow laws at every turn, knowing

Weatherford deftly goes beyond the Tuskegee program to include the ways in which other black Americans did what they could to counter the racism of the home front, acts that give impetus to their own training. There is a poem dedicated to Dorie Miller, the Navy cook who was awarded the Navy Cross for his heroic actions during the attack on Pearl Harbor; another recounts boxer Joe Louis's victories in the ring, his benefit matches to raise money for army and navy relief funds, and his convincing the War Department to admit him and Jackie Robinson to Officer Candidate School

"along with thirteen other men
whom racist policies had barred."  (pg 30)

In another poem, readers learn that singer Lena Horne refused to go on USO tours that barred black servicemen.  And refusing to perform in white-only establishments, too,

"Now Lena pays her own way
to perform for the troops.  When she visits Tuskegee,
she sings, perches on planes, and poses for photos.
How could you not fall for Lena?"  (pg 50)

As the child of a WWII nurse, I personally love that Weatherford even offers up a poem paying homage to the Tuskegee Army Airfield Nurses, finally giving this most unsung group of military nurses some of their due: "it really takes a good nurse to KEEP 'EM FLYING."  (pg 13)

This free verse history is probably one of the best books I have read about the Tuskegee Airmen, simply because there is so much meaning and information to be culled from each poem, yet they are rather sparely written, making each word used important and expressive.  And it all works.

The black and white illustrations were done in collaboration with Weatherford's son, Jeffery Boston Weatherford, an artist in his own right.  For You Can Fly, Jeffery used a technique called scratchboard, which results a much more dramatic illustration than just using, for example, black and white paint/india ink or charcoal on white paper.  Scratchboard results in a textured illustration and these compliment the poems so beautifully, as you can see 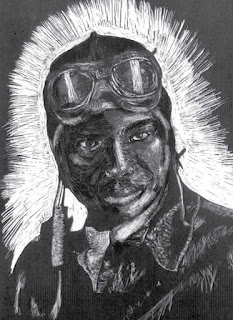 I have to admit I am a big fan of Carole Boston Weatherford's free verse histories.  When she came to Bank Street this year, to accept the 2016 Flora Stieglitz Straus Award for nonfiction for her amazing book Voice of Freedom: Fannie Lou Hamer: Spirit of the Civil Rights Movement, I'm afraid I may have shamelessly fangirled.  So naturally, I was really looking forward to reading this new history-in-verse and let me say, it does not disappoint and I highly recommend it.

Do not miss the Epilogue or the interesting back matter that includes an Author's Note, an extensive Timeline, and a variety of Resources for Further Reading.

This book is recommended for readers age 9+
This book was sent to me by the publisher, Atheneum BFYR
Posted by Alex at 10:51 AM