Girl in the Blue Coat by Monika Hesse 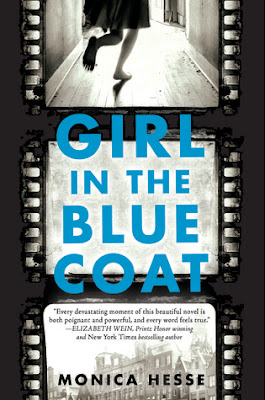 It's 1943, and Hanneke Bakker, 18, has been working as a black market runner in Nazi-occupied Amsterdam for quite a while now and she is good at what she does.  Finding and delivering her customer's requests in the basket of her old bicycle allows Hanneke to keep herself and her parents safe and provided for in a city where everything is rationed.  And since she looks like "the girl Hitler is dreaming of to put on his Aryan posters," Hanneke prides herself on being able to charm her way out of any impromptu Nazi searches.

As Hanneke makes the rounds, delivers her goods, she wills herself to remain distant from her customers, no matter how hard they try to befriend her.  But, one day, after delivering the usual black-market tea to her recently widowed customer, Mrs. Janssen, Hanneke is asked to find something different.  In fact, Mrs. Janssen has been harboring a 15 year old Jewish girl named Mirjam Roodvelt in her pantry.  Mirjam had shown up at her door, pale and wearing a too small sky blue coat, after the Nazis had found and killed her family and Mrs. Janssen's husband for hiding them in his factory.  But now, Mirjam has gone missing and Mrs. Janssen would like Hanneke to find her, a job she believes the young woman can do, given her black market skills.

At first reluctant to accept Mrs. Janssen's request, little by little Hanneke finds herself drawn into the mystery of Mirjam's disappearance.  Visiting the Jewish Lyceum where Mirjam went to school, Hanneke is spotted by a woman who works there.  The woman turns out to be Judith, a friend of Hanneke's brother Ollie.  Both are part of the Dutch resistance.  And now, so is Hanneke, whether she wants to be or not.

At the same time she is looking for Mirjam, Hanneke is dealing with her own complicated war-time heartaches. Her best friend from childhood, Elsbeth, has fallen in love with and married a member of the Gestapo, putting a wedge in the friendship.  And Hanneke is trying to cope with the guilt she feels over the loss of her boyfriend Bas, killed in 1940 trying to defend Holland against the Nazi invasion.
Now part of the Dutch resistance, Hanneke discovers just how much she doesn't know about what is going on around her.  It turns out that Mrs. Janssen isn't the only one of her black market customers who are hiding Jews from the Nazis, and that their beautiful movie theater has been turned into a deportation center. Thinking that perhaps she can find Mirjam there, she arranges a visit with Judith to meet her cousin Mina, an acquaintance of Mirjam's.

As Hanneke begins to put together the puzzle that is Mirjam's disappearance, she begins to understand more and more what is going on around her, and how much she has missed by focusing only on Bas and Elsbeth, not even seeking closure, but allowing her to keep her eyes closed.

Does Hanneke find the girl in the blue coat?  And can she come to terms with her own guilt and loss? Girl in the Blue Coat is a complicate story, but one that you will most likely find difficult to put down.

To begin with, Hanneke is a nicely flawed character.  Though her intentions may be good, she acts impulsively, and because she hasn't paid attention to what is happening around her, she often unwittingly puts herself and others in peril.

And to be truthful, the book is a little flawed as well.  For instance, I never quite figured out why Hanneke decides to look for Mirjam, it just sort of happened.  Was it curiosity?  An attempt to assuage her guilt over Bas?  An inner drive to see if she were as good at her job as she thought she was?  As Hanneke uncovers the ways in which so many others try to sabotage the Nazis and save as many Jews as they can, I asked myself whether her initial motivation to find Mirjam really matters and decided it didn't.  What matters is that she accepts the challenge and that is the first step towards her own healing and enlightenment.

Narrated in the first person by Hanneke, readers will find themselves completely engrossed as they accompany her on her coming-of-age journey towards self-discovery and recovery.