Half a Man by Michael Morpurgo 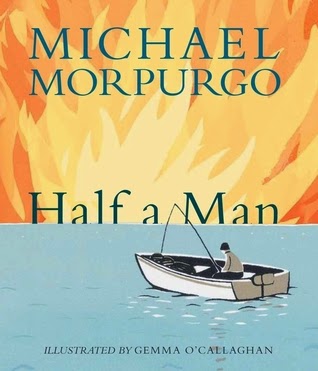 Young Michael had been told by his mother over and over again not to stare at his grandfather whenever he visited his family in London.  But Michael couldn't help it, slyly looking at a grandfather he really doesn't know very well and wondering how his face had gotten so disfigured, how he had lost part of the fingers on one hand and all of them on the other.  His mother doesn't talk about it and his grandfather doesn't talk about much of anything, let alone what happened to him.

Michael's grandfather lives a relatively isolated life on one of the Isles of Scilly, off the Cornish coast, making a living crabbing and lobstering.  When Michael is about 12, he is sent to spend the summer with his grandpa, helping with the fishing, reading, and living a quiet life side by side without electricity, using only a generator that was shut off at night.  But Michael liked it there, it was calming and comforting.

One day, while out in the fishing boat, grandpa suddenly told Michael that the thing he liked about him was that he wasn't afraid to look at his face.  Before long, grandpa is telling Michael about his life and how things came to be as they are.

After marrying his youthful sweetheart, Annie, war broke out and grandpa joined the merchant navy.  One day while crossing the Atlantic in a convoy, his ship was torpedoed several times.  With their ship on fire and sinking, grandpa's friend Jim managed to get both of them off it and into the burning water.  They swam to a lifeboat, and even though there was no room for either of them, grandpa was pulled into it, and Jim stayed in the water, hanging on for as long as he could.

Grandpa woke up in the hospital, with a long recovery ahead of him.  Annie came to visit but grandpa could tell things were different.  When he finally returned to Scilly, they did have a baby girl, but things didn't improve.  Grandpa started drinking, living with so much hate and anger because of the war.  Eventually, Annie left, taking their daughter and never speaking to him again.  Father and daughter were estranged until she was grown and sought him out.  Their relationship was tentative at best, in part because he had always felt like half a man because people only half looked at him, and his own daughter always avoided looking at him.  It was only Michael who wasn't afraid to see his grandpa for who he was, scars and all.

The ink and screen print illustrations are done in a palette of grays, oranges, blues and yellows, and are as spare as the story is intense.  Most are done from a distance to the subject, and those that are close up show no distinct features.  And distance seems to be an underlying theme of the story.  The story is told from the distance of time, about people who are just so distant from each other emotionally and physically.

I know Michael Morpurgo is a master at telling sad stories, but I found this to be a sadder story than usual, even though the end does bring closure, at the request of Michael's grandpa, bringing together his mother and grandmother, who have been estranged for years.  It really makes you sit back and think.  There was so much sadness because of what the war did to Michael's grandpa and the repercussions that resulted leaving these relatives isolated, alienated, even angry with each other, when really it should have elicited kindness, compassion and love.

For that reason, this is a story that will also have resonance in today's world, where we see so many veteran's coming back from war injured, disfigured and with traumatic brain injury.  It begs the question: how will we treat these veterans, these men and women and their families.

This book is recommended for readers age 10+
This book was borrowed from the NYPL
Posted by Alex at 5:00 PM