Code Talker: A Novel About the Navajo Marines of World War Two by Joseph Bruchac 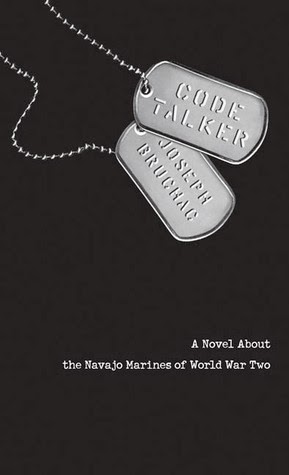 When his grandchildren ask about the medal he has received, an elderly Navajo grandfather begins to tell them "…the true story of how Navajo Marines helped America win a great war." (pg 1)  He begins his story when, at age 6, he leaves the loving confines of his family's hogan on the Navajo Reservation to be educated in an Navajo mission boarding school, not knowing what to expect.

But it doesn't take long for him to find out.  Arriving at the school, he is immediately stripped of everything Navajo - his beautiful traditional long black hair is shaved off, his Navajo clothes replaced by a uniform, the family's turquoise and silver jewelry he wore is taken never to be seen again and  his Navajo name, Kii Yázhí, becomes the anglicized Ned Begay.  But the worst was being told he could never speak his beloved Navajo language again.  The punishments were harsh for anyone caught speaking Navajo, as Ned discovered one day after greeting one of the teachers in Navajo.  And just to make sure they understand things, the students are continuously reminded that all things Navajo are bad, and their language most of all.

But Ned adjusts to life in the mission school and does very well, eventually returning home and going to the Navajo high school.  It is his hope to become a teacher, one who respects all his Indian students.  But, when Ned is 16, the United States is attacked by the Japanese, and reports of what happened in Pearl Harbor prompt his to want to join the Marines.  But he must wait a year before his parents will give him permission.

When he finally does join the Marines, he finds himself part of a group of other Navajos   Ned finishes boot camp and to his surprise, he and the other Navajos are not given the usual furlough Marines are given afterwards.  Instead, they are taken to an isolated location and Ned fears it will be mission boarding school all over again.

It is school, but it is a far cry from mission school.  In mission school, Ned and the other students would have to secretly speak Navajo, but now, they were being asked to use their sacred language to help the United States win the war against Japan.  It is Ned's job and the job of all the Navajo Marines to turn their language into a secret code.  And they cannot tell a single solitary person about what they are doing.

Eventually, Ned ships out to the Pacific theater where he is a radio operator, trained to both give and receive messages using the code he helped develop.  Ned and the other Marines fight their way across the Pacific theater of Guadalcanal, Bourgainville, Guam Iwo Jima and Okinawa, in some of the bloodiest fighting of the war.  All the while, Ned feels pride and satisfaction knowing that his beloved language used as a Navajo code cannot be broken by the Japanese.  Ned serves in the Pacific until the end of the war, but the reader should keep in mind that in 1945, he was still just a teenage boy.

Code Talker is a realistic novel about the war and about the life of the Code Talkers.  Bruchac wrote it using a framing technique, so the young reader knows from the beginning that Ned survived the war.  As an elderly grandfather now, Ned tells his story fluidly and fluently.  Bruchac's plot is tight and straightforward, as is the language used.  Any reference to Navajo culture, custom, or way of life is respectfully explained within the story but without taking the reader away from the story.  For my part, however, I found the narrators voice is so intimate that after a while I begin to feel like I was sitting among his grandchildren listening to his story.  That, to me, is the sign of a really good book.

One important aspect that Bruchac includes is Ned's Navajo religion.  Ned often refers to the Holy People who watch over him and help him.  He also describes different ceremonies, like the protection ceremony called the Blessingway, done before Ned becomes a marine or the Enemyway ceremony, done when Ned returns home from war suffering what we would call PTSD nowadays, and done to put him back in balance with the world.  Each morning, Ned does his morning prayers, using the pollen  he is given in his Blessingway.

Although this is a book that is also about war, and covers some of the harshest, bloodiest fighting in circumstance that are difficult to imagine, it really has a very low key way of handling the combat sections.  They are more focused on Ned and the other marines than in anything else.  And the reader learns how men (and now women) survive in combat, from living in foxholes that had to dig themselves under enemy fire, to making soup in their helmets and constantly dealing with lice and rats

You might be interested in knowing that from the original 29 Code Talkers by the end of the war there were more than 400, including men from the Choctaw, Comanche, Navajo and Hopi tribes, all using their own tribal language.  The Code Talkers were not allowed to speak of their wartime accomplishment until 1969, when their work was declassified.  In 2000, President Clinton awarded the original 29 Navajo Code Talkers the Congressional Gold Medal, and the other Code Talkers the Congressional Silver Medal (which is the medal that sparks Ned's story).  Sadly, in June 2014, the last living Code Talker, Chester Nez, passed away at age.

Do read Code Talker if you are interested in Native Americans, codes and/or WWII.  It may read a little slowly at times, but it is well worth it.  Bruchac includes an Author's Note at the back of the novel, as well as a Selected Bibliography that includes books about Navajos, books about the Code Talkers and books about WWII for anyone interested in more information.

A useful discussion guide for Code Talker is available from the publisher, Scholastic

This book is recommended for readers age 10+
This book was purchased for my personal library
Posted by Alex at 10:53 AM