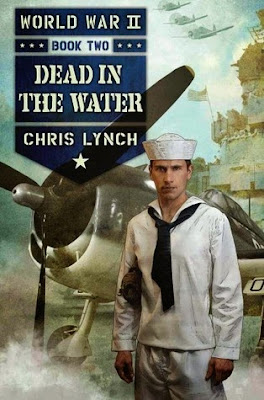 Hank and Theo McCallum are about as close as brothers can be, so when it looks like war is inevitable, their plan is to enlist in the navy together.  That way, they can look out for each other.  Except their father isn't having any of that - his thinking is that it would only take one torpedo to kill both his sons.  Before they even leave the house to enlist, it Hank for the navy, Theo for….the Army Air Corps.

A few weeks later, Hank and Theo are off to the Navy and Army, and it isn't long after boot camp that Hank finds himself on the aircraft carrier USS Yorktown, heading to the Pacific Ocean after the bombing of Pearl Harbor.  On board the Yorktown, Hank is an airedale, which means his duties are plane-handling on the flight deck, doing everything except flying the aircraft he takes care of.  But Hank also has a reputation for always wanting to throw a little ball.  Before the Navy, Hank and Theo were all about baseball, and when they left for the war, Theo gave his well-used glove to Hank.  Now, with two gloves and a ball, Hank was always looking for someone to throw with during down time.

Once in the Pacific, the Yorktown doesn't see any real action until after a visit to Pearl Harbor.  Seeing the aftermath of the attack there, however, finally makes the war real for Hank, but he has absolute faith that the US will win.  Meantime, he meets a throwing partner, who actually has a few baseball tricks he can teach Hank, who is pretty good himself.  Mess Attendant First Class Bradford had played in the Negro Leagues before the war, but now he is generally stuck below deck, serving the pilots, sleeping far down in the ship, even below the torpedoes, because of the Navy's policy of racial segregation.

Hank and Bradford soon become friends and throwing buddies, often joined by two of the pilots whose planes Hank services whenever they fly missions.  At first, the Yorktown and its partner ship the Lexington still don't see much action, but a bad attack on the ships causes the Lexington to sink and the Yorktown to have to limp back to Pearl Harbor for repairs.

With time on their hands, Hank, Bradford and their two pilot friends decide to head to Waikiki Beach, even though Bradford isn't allowed to be there because he is African American.  When two policemen try to get them to leave, they refuse and they prevail.

Soon the Yorktown is really to sail again, headed for Midway Island and a life and death battle with the Japanese.  Once again, the Yorktown is hit, and sinks.  Can Hank survive a sinking ship?

Dead in the Water is narrated by Hank and although he and Theo are close, we don't really ever know how Theo is doing.  This is Hank's story (Theo is book 3).  Lynch always manages to make his narrators so believable and so historically real sounding, and Hank is no different.  He has a real 1940s way of speaking.  My only complaint is that there is too much baseball involved.  On the other hand, Lynch doesn't overdo it on the military stuff, including combat details.  There's just enough description and not too, too detailed on that front.

At first, I was afraid that taking on the racism that black sailors faced in the Navy (in fact, in all the Armed Forces in WWII), might be a bit over the top in a book like this, but it really works and he manages to make his points quite nicely, the beach incident is packed with tension.  I did find it a little surprising that Hank, baseball obsessed as he is, never heard of the Negro Leagues, and the Newark Eagles, for which Bradford played.

Dead in the Water is the third Chris Lynch book I've read, and I have to be honest and say they have all been very good.  The story flows nicely, they are historically correct, and most important to me, Lynch doesn't glorify war.

And, of course, now I am curious to know what happened to Hank and his friends.