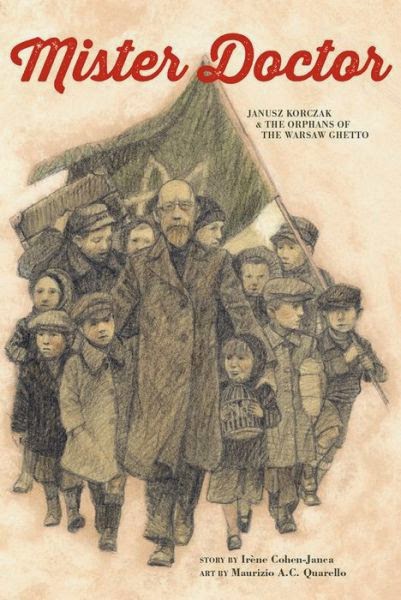 Janusz Korczak was a well-known, well-respected children's pediatrician in Poland in the early part of the 1900s.  Among his many accomplishments, he had founded an orphanage to care for some of Warsaw's young Jewish orphans. He loved children and would often regale his charges with stories he made up, including the now classic tale of King Matt the First, as well as looking after their health and cheering them up with their needed it.  And the children loved him back, affectionately calling him Mister Doctor.

On November 29, 1940, all the orphans living in the big orphanage at 92 Krochmalha Street in Warsaw, Poland were ordered to leave by the Nazis.  Accompanied by Mister Doctor and his assistant Madam Stefa, all of the children walked to the ghetto that would be their new home for a while carrying their meager belongings, softly singing, and the flag of King Matt the First.

Their new home is small, located within a two block radius, surrounded by barbed wire and armed watchman, their living quarters are cramped and dirty.  When their wagon full of potatoes were confiscated by the Nazis, Mister Doctor put on his WWI uniform and went to Gestapo headquarters, where he was laughed at, ridiculed, beaten and temporarily arrested.

Life in the ghetto grew more and more crowded as more Jews were brought in, food became scarcer and scarcer, with men, women and children dying in the streets everyday from starvation and disease.  Finally, in August 1942, the children were ordered to the train station and from there to a concentration camp and death.  But Mister Doctor was offered his freedom, after all, he was a famous doctor.  Instead, he refused and choose to accompany his children on this final journey.

The story Mister Doctor is told by a young boy named Simon to a younger, newly arrived orphan named Mietek.  Simon describes in detail how the orphanage was run, how the children were educated and how Mister Doctor took such special care of all of them.  At the same time, Simon is talking about past, he also gives detailed information to the reader about what is going on in their present situation.  Cohen-Janca has really captured the sense of longing and nostalgia in Simon's voice when he talks about life in the orphanage before the Nazis invaded Poland, and the fear and apprehension he feels about what is to come.

The story told here is a fictional reimagining of what happened to Dr. Janusz Korczak and the children in his care, but based on the true story of what happened to them during the Holocaust.  Pay particular attention to the last three paragraphs of this book and ask yourself who wrote them and why?

Like Michael Morpurgo's Half A Man, this book also looks like a chapter book with only 68 pages a simple narrative style and many illustrations, but it is also deceptively complicated and really for a middle grade reader.

The realistic black and white illustrations set against a marbled peach background are a precise reflection of the words that Cohen-Janca has written, and give the reader a real-to-life sense of the children, the doctor and their lives from 1940 to 1942.  Little touches, like the figure of Puss in Boots leaping over the barbed-wire fence of the ghetto as Simon talks about how that cat and his courageous deeds always gave the orphans courage.  But there is a subtext that says the Nazis can take away housing, food, dignity, but not the stories that means so much and help the get kids through very difficult times.

This is a powerfully poignant story that shouldn't be missed.  Additionally, at the end of Mister Doctor is information about the real Janusz Korczak, whose real name was Henryk Goldszmit, followed by a briefbut useful list of Further Reading and Resources, Children's Books by Janusz Korczak, Resources for Parents and Teachers and Related Links.

This book is recommended for readers age 9+
This book was an E-ARC received from NetGalley
Posted by Alex at 10:35 AM