The War Within These Walls by Aline Sax, illustrated by Caryl Strzelecki, translated by Laura Watkinson 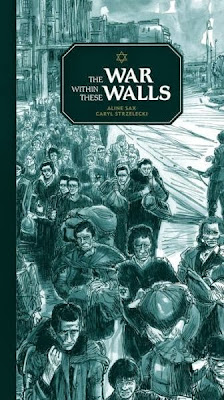 The War Within These Walls is a slim graphic novel based on a real event.  Narrated by teenage protagonist Misha, it follows the fate of his Jewish family living in Poland at the start of WWII.  Little by little the Nazis made life untenable for the Jews in Poland.  Eventually, the Jews were all moved into various ghettos around Poland, Misha and his family found themselves living the the Warsaw Ghetto.

With little food and people dying of starvation every day, Misha begins to sneak out of the ghetto at night to find food to smuggle in for his family.  Soon, his younger sister Janina starts following him and when he insists she stop when the Nazis were starting to hang smugglers, she leaves the ghetto on her own and doesn't return.

Then, the Nazis announced that the Jews were going to be resettled in the east to have a better life.  People thought that might be a good thing until the freight trains with only cattle cars arrive.  As the Nazis swarmed the ghetto to find anyone who tried to hide, Misha realizes that they were going east to be killed not resettled.

Hiding from the Nazis during the raid, Misha meets a young man named Mordechai Anielewicz and his life as a Jewish resistance fighter begins.  As he meets other Jews in the resistance, Misha feels a sense of renewed hope.  The Nazis planned to liquidate the ghetto on April 19, 1942, a date that coincided with the Jewish holiday of Passover.  But they were never expecting to meet resistance, but Misha, Mordechai and the other Jews for back, culminating in what we know call the Warsaw Ghetto Uprising.

Using sparse test accompanied by stark black and white pencil, pen and ink illustrations against a black or white pages, The War Within These Walls is one of the most powerful books I have read about the Holocaust and the Warsaw Ghetto.  The slim design of the physical really imparts the sense of how increasing narrow the Nazis made world for the Jews in Europe, while the height reminded me of how Misha saw the freedom of birds who had the freedom could just fly away from the ghetto.

And it is a grim novel, full of despair, but how could it not be.  One of the most poignant parts of the story was the disappearance of Janina after she runs away from the ghetto.  I could really feel Misha's agony not knowing what happened to her - did she survive or was she captured and killed?   Like so many many Jewish families caught in the the Nazi reign of terror who never saw their loved ones again and never learned what became of them.

By the end, I could really see how Misha and the other resistance workers saw hope in what they were doing even though it proably would spell certain death for them.

This is a heart breaking novel in its very simplicity, but not to be missed for mature teen readers interested in the Holocaust and WWII.

At the end of The War Within These Walls, there is a short biography about Mordechai Anielewicz, who was indeed the leader of the resistance within the Warsaw Ghetto.  He was born in 1919 and killed on May 8, 1943 during the Uprising.  He was only around 24 uears old at the time.