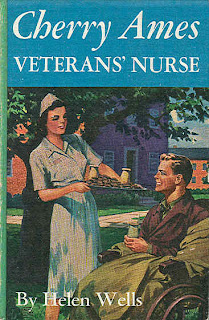 Today is Veterans’ Day in the United States and Remembrance Day (le jour de Souvenir) in Canada, a day for honoring veterans of all wars. It is celebrated on November 11th every year because that is the day the armistice became effective, ending the hostilities of World War I. In fact, in the US, it used to be called Armistice Day until 1954, when it was changed to Veterans Day to include all veterans of all wars. I have chosen Cherry Ames, Veterans’ Nurse specifically for this day.

Before her long and varied career history as a civilian nurse, Cherry Ames served in the armed forces. In Army Nurse, she joined the Army Nurse Corps, went through basic training and headed out to Panama City, to nurse wounded soldiers (see Cherry Ames, Army Nurse); in Chief Nurse, she helped organize a hospital evacuation on a Pacific island; in Flight Nurse, Cherry flew into battlefields to pick up wounded soldiers and bring them to hospital.

In Veterans’ Nurse, Lieutenant Ames is stateside, still in the Army but awaiting her discharge papers. Cherry is assigned to Graham Hospital, and though she lives in Nurses’ Quarters on the grounds, she is conveniently located 30 miles from her hometown of Hilton. Graham is a VA hospital specializing in bone injuries and, as the head of nursing Colonel Brown explains “Our job is to rebuild broken men, physically and mentally.” What she didn’t say was that


…each of these young men was wounded in the defense of his country – nor that to live and work again minus hands, arms, legs, eyes, or hearing was a terrific hurdle – nor that nurses here had to mend spirits as well as bodies, had to find useful and self-sufficient futures for these brave men. (pg 20)

Yet, Cherry knew this was exactly what she meant.

Cherry is a floater for two months, which means that she will go wherever she is needed, though that seems to be on the same ward with the same men throughout the novel. She is assigned to Building 7 (there are 6,000 beds and 100 buildings at Graham), where they are awaiting the arrival of new patients – men on stretchers, litters, and crutches, many wearing Purple Hearts pinned to their pajamas. Five men are assigned to Cherry’s care, but her most difficult patient is Jim Travers. Jim has lost his right leg in the war and is severely depressed about his future. He refuses to eat, to socialize with the other men, and call his mother to tell her what has happened and where he is.

Gradually, though, Jim does begin to improve, at least physically with the help of a Reconditioning Officer to increase his overall physical fitness, Occupational Therapy, where he learns skills for future employment, making beautifully crafted items of wood, and Rehabilitation Therapy, where he learns to adjust to the new artificial leg he is fitted with. Of course, Cherry’s excellent nursing care and cheerful optimism also helps him overcome his obstacles. When he finally masters his crutches, Jim is allowed to walk into the nearby village alone. Unfortunately, this doesn’t go well, but helps to show that pity can be very callous. While waiting to cross a street, he overhears two older women discussing him: “They whispered, what a shame, and wasn’t it too bad it was hopeless, and such a young man to go through life like that.” (pg 104) This is indeed a set back for Jim, who tells Cherry “A one-legged man, unable to do his old work, is an object of pity.” (pg 105) Jim's dark mood doesn’t last long, however. Cherry takes him home with her one weekend, where he is not treated as an object of pity.

There is a parallel story besides that of the wounded veterans. Cherry is introduced to the Demarests, a wealthy young couple with a 4 year old son named Toby and who are known for their generous hospitality towards the soldiers at Graham. Toby is bed-ridden due to a mysterious disease. His body is not able to absorb nutriments from food and he is wasting away. Cherry spends time at the Demarest home whenever she is able, visiting and telling Toby stories. One day, she shows up and discovers a new healthier Toby, thanks to a mysterious medicine his doctor has given him. At the same time, however, it is discovered that some very valuable amino acid medication is missing from the hospital supply room, despite being kept under lock and key. Cherry puts two and two together, and with the help of Jim, devises a plan to catch the thief and at the same time, bolster Jim’s confidence in himself.

Once again, Helen Wells did her homework and provides the reader with accurate, informative descriptions of what goes on in a VA hospital, albeit a bit sanitized for her young readers who might not be able to understand the dark psychological effects war can have on soldiers. To her credit, she made young readers aware of some very serious issues at the time when many probably were dealing with returning soldiers themselves. Wells mixed these issues in with some lighter fare, like the requisite love interest in the form of Captain Wade Cooper of the Army Air Force, an amusing teenage crush at home, descriptions of the pranks the nurses’ play on each other and the many squirrels on the hospital grounds who demand peanuts from everyone who crosses their path. Cherry Ames is still a fun though dated series and young readers will continue to discover her. Michelle Slatalia wrote a funny article in the New York Times called “Cherry Ames, My Daughters Will See You Now” which can be found at http://www.nytimes.com/2006/04/06/fashion/thursdaystyles/06Online.html 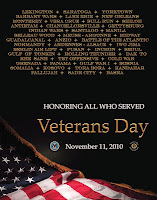 I hope you will all join me in honoring the men and women in the Armed Forces here and abroad. The Department of Veterans Affairs has an excellent website which includes resources for teachers and students at
http://www1.va.gov/opa/vetsday/ Stop by and check it out, and be sure to watch the short film located there.

And as an act of indulgence, I would like to dedicate this post to the veterans in my family and yours. And to Captain James Grace, whose name I wore on a bracelet when I was still too young to understand what war was all about: