The Messenger Bird by Ruth Eastham 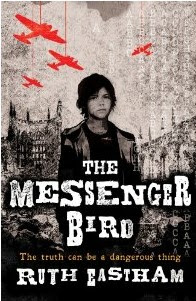 It's bonfire and housewarming night for Nathan Vane, 12, and his family.  All the excitement and people accounts for why he didn't notice the two men in suits until his dad did and then, before Nat knew it, they had arrested his dad.  But just before that, Nat's dad gives him a very cryptic message to follow Lily's trail. But who is Lily and where was her trail?  He also tells Nat not to trust anyone, or tell them anything about the mystery he needs to solve now for his dad, not even his mother - the less they know, the safer they are.

Leon Vane has reason to worry about his family.  Turns out, Nat's dad is accused of being a traitor/terrorist for breaking the Official Secrets Act.  It is believed that he had sold top-secret information to the enemy that ultimately caused the death of British soldiers, information that he was able to get because of his job at the Ministry of Defense.  This is serious stuff, but he seems to feel Nat is capable of figuring out the clues that will ultimately prove his  innocence.  Luckily, Nat and his dad always shared a love of puzzles, codes, and riddles.

Unable to imagine his dad doing such a thing, Nat must first figure out the mystery of who Lily is.  Apparently, she was someone who had lived in their house long ago.  But Auntie Hilda had always lived in the house.  Indeed, it was so full of all her old WWII memorabilia, it felt like a museum.  And didn't dad always say how happy he was whenever he was visiting Auntie Hilda as a boy?  So how did Lily fit into things now?

Following his dad's advice to always think literally and laterally when solving a puzzle, Nat does figure out who Lily is.  And, Lily did indeed live in the house - billeted there in 1940.  But when Nat finds a note written by her it only leads to yet another mystery that need to be solved.

And it doesn't take long for Nat's best friends, Josh and Sasha, to realize that something is up with him and Nat finally takes them into confidence.  With their help, the three kids begin following a trail of clues and coded messages, all of which leads them to Bletchley Park and the World War II code-breakers and one codebreaker in particular - Lily Kenley.

But how does the work of a wartime codebreaker connect to the trouble Nat's father is in?

Eastham has nicely incorporated Britain's wartime past, namely Bletchley Park, the Enigma Machine and the bombing of Coventry Cathedral, with the present to produced a fast paced, exciting mystery, ideal for young readers.

What a fun book this was to read, the more so, I suppose, because I have always loved codes, puzzles and riddles myself.  I loved the visits the kids made to Bletchley Park and reading about how they solved the mystery, although at times, finding a clue seemed a bit too easy.  But that certainly didn't diminish my enjoyment of the story one bit.

All in all, The Messenger Bird was a compelling, skillfully done mystery with wonderful historical bits.  And best of all, the ending was a complete surprise.

Bletchley Park was originally slated for demolition, but was saved and it in the process of being rehabilitated.  You can read about Bletchley Park and the WW2 Codebreakers HERE

The bombing of Coventry and the Cathedral, called Operation Moonlight Sonata by the Nazis, happened on the night of November 14-15, 1940.  It was carried out by over 400 Luftwaffe planes and lasted around 13 hours.  Coventry was bombed to destroy the factories there and to break the morale of the people.  You can read more about the bombing of Coventry HERE