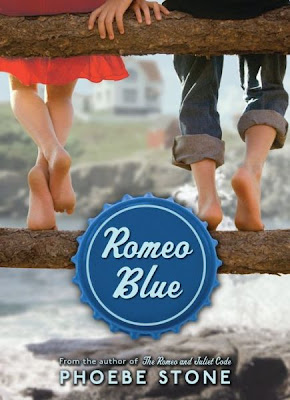 I really enjoyed reading Phoebe Stone's novel The Romeo and Juliet Code back in June 2011 about Felicity Budwig Bathburn, 11, brought from 1941 blitzed London by her parents to live in safety with some very eccentric relatives living in Maine.  Her parents, Winnie and Danny, returned to London and Felicity only knows they are doing something undercover for the war effort.  Flissy, as she is immediately nicknamed, adjusts to life in the Blackburn home, growing to love her Uncle Gideon, Danny's brother, her flamboyant Aunt Miami and her strict but kind grandmother, called The Gram, and in the process, she solves a mystery that changes her life completely.  I highly recommend this lovely Middle Grade novel.

Now, Flissy is back in Stone's wonderful new sequel Romeo Blue and there are more mysteries to solve.  It is 1942 and Flissy is 12 and feeling the first pangs of love - with Derek, 13, an orphaned boy the Blackburn's have been caring for for sometime.  Derek has been trying to locate his real father and has just been contacted by a Mr. Fitzwilliam, who claims he has found the missing man.  Sure enough, a man claiming to be Derek's father starts visiting the Blackburn house, but refuses to have his picture taken and, as Flissy points out, behaves rather oddly and asks some strange questions.  But Derek has sworn her to secrecy so she can't say anything to her father-uncle Gideon or The Gram about her suspicions that the man is a fraud.  Now, Flissy is afraid she will lose Derek to his quest to find his father.

Meanwhile, other strange things are happening.  First, a box containing a Nazi uniform arrives for Gideon.  Then, two men from Washington show up at the house, with a film projector, Flissy enlists Derek's help in eavesdropping on the adults to find out what is going on.  It turns out that Winnie and Danny have gone missing in occupied France and Gideon has been selected to find and get them out of Nazi hands.  Flissy has always suspected Gideon of being involved in spy activities along with Winnie and Danny and now she is beside herself with fear and worry.  Will she ever see Winnie, Dannny and Gideon again?

Gideon does manage to get Winnie out of France, but not before he is shot.  Winnie gets to the Maine house, but the Gram doesn't welcome her.  And in fact, Flissy finds she also has conflicting feelings towards her mother now.  Winnie treats Flissy like a child, refusing to see she is growing up and some unusual mother-daughter strife occurs.  Or has Flissy just romanticized her mother so much over the last year that they will never get along again?

Aunt Miami is largely gone from this novel.  She has joined the USO and is traveling around the country entertaining the troops.  But she has left behind her mailman boyfriend, Mr. Henley, a poet at heart who is drafted into the Army and finds himself fighting in North Africa.

This is one of those books that is hard to write about without getting into Spoilers and it is too good a story to spoil for future readers.  Suffice it to say that there is a lot going on in Romeo Blue: more mystery, more spying, more disappointment,  more changes, in short, more good stuff.  Yet, Stone keeps it all in perspective and never lets the story run away from her in this well-constructed novel.  She has created quirkily realistic characters involved in what could easily have been real situations for people living on the Maine coastline during WWII.  And Stone has captured the essence of life on the home front during the war - rationing, shortages, blackout, curfews and generally making due.

Felicity is much more of a developed character in this second novel (not that she wasn't in the first book), probably because she is older now and settled into life at the Blackburn house.  And it is interesting to watch her fledgling love for Derek and his for her, even if it is a love that can never be realized.  Of course, you will have to read the book to find out why and it is worth it.

Romeo Blue is a compelling coming of age story, and Flissy is an engaging narrator.  Though it is a home front novel that takes place away from the actual war, it still gives a clear picture of how WWII impacted kids in so many different ways and none of them positive.  On the other hand, it demonstrates just how strong and resilient kids can be and that is a positive thing.

And finally, there were some loose ends remaining at the end of Romeo Blue and it is my sincere hope that Phoebe Stone will seriously consider a third volume to tie them up.

My fingers are crossed, Phoebe!! 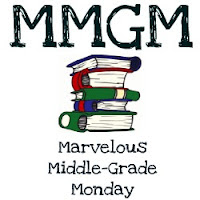 
FYI: One of the men who came from Washington to see Gideon was William Donovan.  Donovan was head of the Office of Strategic Services in WWII, which was the wartime intelligence agency (the OSS later morphed into the CIA).