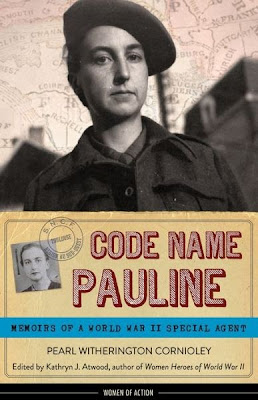 When most of us think special agents, the figure that most often comes to mind is that of James Bond, code name 007, part of the Secret Intelligence Service, or M16.  Bond is fun, but he is nothing like real life.  In reality, being a special agent can leave you cold, wet, dirty, hungry, and sometimes your stuff ends up in a lake when you parachute into an occupied country as you will discover when you read Code Name Pauline.

In a series of interviews, Pearl Witherington Cornioley tells about her life in the SOE, or Special Operations Executive, whose purpose was to "locate, assist, supply and train willing resisters within occupied countries by sending them British-trained agents," (pg xxi) people who could speak the language of the occupied country with native fluency.  The SOE was a top secret organization, so top secret no one in it knew its real name until after the war.

Pearl Witherington Cornioley was a perfect candidate.  Although she was a British citizen, she had been born and raised in Paris and so, naturally she spoke fluent French.   When the Germans began their invasion of France in June 1940, Pearl, her mother and three sisters (her father had already passed away) needed to get out of France and back to England.  It was a long, harrowing seven-month trip, but they luckily received help along the way and arrived back in London in July 1941.

Morally opposed to the occupation of France by the Nazis, Pearl knew she could do more tho help the resistance working in France than doing paperwork for the Air Ministry in England and so she applied to the Inter-Services Research Bureau, which actually turned out to be the SOE, along with an old friend from France, Maurice Southgate, also a Brit.

After a grueling training period and only three practice jumps, Pearl, at the age of 29, parachuted into France in September 1943 disguised as a cosmetics saleswoman.   For the most part engaging in acts of sabotage to slow down and thwart the Nazis, Pearl recounts some of the small every day details of resistance work we don't usually hear about in fiction and about her close calls with the Gestapo where luck was on her side.

Then, when her friend Maurice was captured by the Gestapo and sent to Buchenwald Concentration Camp, Pearl took over the leadership of 3,500 resistance workers and assumed the code name Pauline for the remainder of her time with the Resistance.

Pearl never spoke about her work in France with the Resistance after the war.  She married Henri Cornioley with whom she had been involved even before the war and who she worked with during it,  and lived a relatively quiet life.  In 1994, she and Henri decided to give some interviews to French journalist Hervé Larroque, which were published in French under the name Pauline.  Kathryn Atwood presents this narrative of Pearl's for the first time in English with the publication of Code Name Pauline.

Code Name Pauline is an interesting, exciting memoir about a woman I would love to have met.  Pearl/Pauline is feisty, almost fearless, and very morally principled, but she is also stubborn, as you will discover when you read about why she refused an honor given to her by Britain for her work in the resistance.  Bravo, Pearl!

And because reminiscences aren't always linear, or clear and sometimes digress,  Kathryn Atwood, who first introduced English readers to Pearl's story in her excellent work, Women Heroes of World War II, has written a comprehensive introduction to each chapter and has also included in her back matter a list of key figures, an extensive appendix and chapter notes, all very interesting and useful to the reader.  There is also an insert of photographs of Pearl, her family, her forged documents and, of course, Henri.

Pearl passed away in 2008 at the age of 93.  Obituaries give much additional insight into a person's life and you might like to read Pearl's obituary from The New York Times and The Telegraph

This is book 4 of my 2013 European Reading Challenge hosted by Rose City Reader
Posted by Alex at 10:16 AM