Racing along New York City streets one March 1945 day, Linus Muller stops to catch his breath when his attention is suddenly arrested by a familiar face on a poster.  Noting the address on the poster, Linus changes course and sets off for it instead.

Flashback to September 1943: Linus is 12 years old and has just inherited his older brother's shoes and his job delivering groceries for his parent's shop.  In fact, with six kids and a war on, everything is a hand me down, except for Linus's older brother Albie, who is off to war now that he is old enough to enlist.  Linus has also inherited Albie's bed and has been made caretaker of Albie's superhero comic books collection, a love they shared, as well as Albie drawing of his own superhero Mr. Superspeed, with whom Linus keeps a running conversation while he makes his deliveries.

As Linus begins his life as a delivery boy, he meets all the customers and quickly learns their quirky ways, like Mrs. DeWinter who always has another task waiting for Linus to do when he brings her groceries.  His job takes him all over the Upper East Side of Manhattan, an area Linus knows like the back of his hand.  Late in the afternoon, on his first day, his mother hands Linus a crate of oranges and tells him to deliver them to 15 East 59th Street.  Little did Linus know this would be his most interesting monthly delivery.

Living there is an elderly painter with a difficult to remember name and a studio that has stark white walls, except for the groups of brightly colored squares and rectangles here and there.  Linus started called the painter Mister Orange and it turns out that Mr. Orange had recently arrived from Nazi-occupied Holland to escape Hitler's oppressive control on the arts.

Meanwhile, brother Albie is still excited to go to war and ships out to Italy as soon as basic training is over.  At first, Albie's letters are still filled with enthusiastic descriptions about being a new recruit and the friends he has made.  From Italy, he asks Linus to play a rather harmless practical joke on a friend's mother for her birthday and leave a card from her son at the same time.  Linus carries out his mission with stealth, but then Albie's next letter is more somber and sad, as he reports his friend has fallen in battle.

Linus understands how it feels to lose a friend.  It appears that he is losing his best friend to an older boy who dislikes Linus as much as Linus dislikes him.

And so his visits to Mr. Orange become a bright spot in his life and it is there that the two talk about life.  Angry at the reality of war that Albie describes, Linus decides that comics and superheroes are imaginary escapes from all the horrors in life and rejects them completely.  Now he doesn't even have the voice of Mr. Superspeed to accompany him.   But as Mr. Orange talks to him about his painting and even teaches him how to dance the boogie woogie, he also tells Linus about the importance of imagination, especially during wartime: "If imagination were as harmless as you think...then the Nazis couldn't be so scared of it." (pg 122)  All the while, Mr. Orange works on his latest painting, a freedom he would not have had if he has remained in Europe.

Can Mister Orange help Linus through this difficult time?

Originally written in Dutch and skillfully translated by Laura Watkinson, Mister Orange is itself a wonderful historical fiction work of imagination that skillfully portrays the daily hustle and bustle of life in one New York City neighborhood during WW2 as Linus makes his deliveries.  I grew up in Brooklyn and Manhattan at a time when Mom and Pop grocery stores were still common (my brother's first job was delivering groceries), and if you had a fight with your best friend, you just went over to their house to make up - just the way Linus does - very simple, very easy.    So I know that this and more  of Mister Orange is pretty spot on.  And so is the Action Comic that Linus buys for Albie - November 1943 No. 66.  Matti has done her research well.

But the friendship between Mister Orange and Linus would be unusual, though maybe not impossible.  In a way, however, it is a nice example of how even a short lived friendship can impact our lives, in this case from September 1943 to February 1944.

Mister Orange is a nice coming-of-age story that unfolds slowly and steadily, but should still engage young readers, though probably not everyone.  Linus is a thoughtful, introspective, observant boy who really loves life, at least until reality comes knocking and he finds his world terribly shaken.

I put Mister Orange on hold at the library based only on the cover and knowing it was a WW2 story because I loved the cover of the American edition.  Piet Mondrian (1872-1944) is one of my favorite abstract painters, so as soon as I saw the cover, I knew he would be in the story somewhere, someway.  Jenni Desmond, the illustrator of Mister Orange, has really captured both the motion of the city as Linus travels around and the sense of movement that Mondrian's painting reflect, so that it becomes such a wonderful mixture of Linus's life, and Mondrian's painting, which is as it should be.  I found myself going over it again and again after I finished reading the book.

In the back on the book is a section called Mister Mondrian.  This FYI section describes his life and the paintings he did while live in New York City.  The painting that he was working on during Linus's visit was his never completed Victory Boogie Woogie, see here:
Mondrian's studio had an immediate, deep impact on Linus and helped him realize hope for the future.  Here, though, are photos of that studio, almost exactly as Linus describes them (right down to the orange crates): 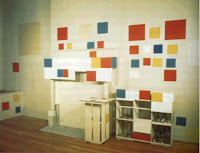 There are some who think this book would not appeal to young readers, but I think they will enjoy reading about Linus and his life, and the person who helped him work things out for himself.

This book is recommended for readers age 9+
This book was borrowed from the Webster Branch of the NYPL
Posted by Alex at 8:29 AM