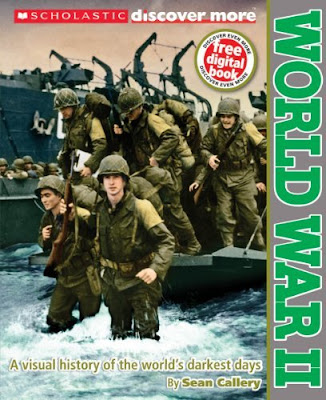 This is a shiny new book from Scholastic, part of their Discover More series.  It covers World War II, beginning with the end of World War I and the rise of Nazism right through to the end and even some of the postwar period.  The layout consists of different time lines for each aspect of the war, as follows:  the path to war, Europe and the Atlantic Ocean, the Pacific theater, the war in Africa and the Middle East  and the End of the War,  followed by subcategories of information pertinent to the years covered in each timeline.

This is by no means an in-depth history of the war, but it is a comprehensive one and what it does is give a little information on a wide range of topics.  Two of the topics I liked best were the Resistance and Codes.  After reading so many books about how resistance workers or Special Operations Executive agents parachuting into an occupied area with a radio transmitter disguised in a suitcase, it was nice to see a large, clear photograph of a real one.  The same was true under the section on Codes, which I have always been fascinated with, particularly the German Enigma, a cipher machine which produced messages that the German thought were unbreakable.  Again there is a up-close photo of a real Enigma machine.

In the side margins of some of the pages are ways to get more information about what is covered, as well as definitions of words that may be unfamiliar.  Since I am interested in pop culture, I used that page as an example:

There is also a free digital book that you can download from Scholastic called WWII Heroes and Heroines.  It comes in PDF form so you will need Adobe Reader.  I actually did download this digital book and look through it.  I liked that among the adult heroes and heroines there was a section about the children who were also heroes, beginning with Anne Frank, but also including many unknown and unsung child.

Before I started this blog, I would have thought that young readers were not terribly interested in WWII beyond some interesting novels and what they learned in school, but the longer I write this, the more I hear from kids who are genuinely interested in it.  This is an ideal book for a classroom, a school library and certainly a homeschooling situation,  but it is also a great beginning reference book for any kid who is showing some curiosity.

World War II is truly an visual history, with an abundance of photographs, maps, and illustrations, some familiar, some not and none very graphic.  I was very happy to see that under the Holocaust section there was a special homage to the 1.5 million children who perished as well as a section on Wartime Childhood, since there are areas young people are very interested in.  "What was it like for kids?" is probably the question I am asked the most.

This book is recommended for readers age 10+
This book was provided by the publisher.

Nonfiction Monday is hosted this week by A Mom's Spare Time