All the Children Were Sent Away by Sheila Garrigue 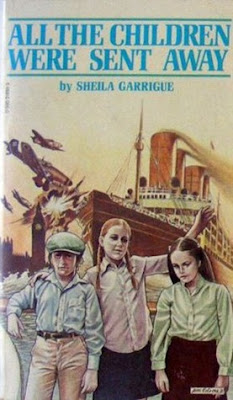 It is the summer of 1940 and the war has finally found its way to the home front.  Air raids in London are becoming more and more frequent and bombs are beginning to fall.  And so when her uncle in Vancouver, BC writes to her parents in London and suggests that they send 9 year old daughter Sara Warren to Canada for the duration, they also think this would be a good idea.
They decide to place Sara in the care of Lady Drume, who is making the same trip for war related reasons. Sara has some reservations about meeting Lady Drume, but her mother reassures that it will be fine, though she does admit that Lady Drume is a funny old thing.
And that turns out to be an understatement.  Lady Drume immediately begins to order Sara around, before Mrs. Warren has even said good-bye, and once on the ship, she demands “implicit  obedience” from Sara.  This means staying in their cabin and never wandering around the ship alone.  But when the friendly old sailor Wilfrid Horace Mickleby a/k/a/ Sparky invites up on deck to watch the ship weigh anchor, Sara commits her first infraction of Lady Drume many rules.
Luckily, Sara sits next to the friendly ship doctor for meals, who later takes her to the lounge to meet the other children being evacuated from the East End of London, including siblings Ernie and Maggie.  Sara immediately likes them, but Lady Drume tells her she may not hang out with “guttersnipes” while under her care.
Lady Drume is, to say the least, a dictatorial snob.  Not only does Lady Drume avoid all the other people on the ship except the Captain, she refuses to attend the lifeboat drills should the ship be attacked and decides that she doesn’t need to wear her life jacket even though it is mandatory.
When the ship is attacked and sustains damage, it is "guttersnipe" Ernie who leads Lady Drume and Sara to safety.  Sara hopes that now maybe things will change.
Yet, nothing really changes.  The day after the attack, Sara is told to fetch a book for Lady Drume, and she decides to bring an apple to the doctor on her way.  Sara gets delayed helping out in sick bay, and once again, finds herself in trouble.  Lady Drume had focused on Sara’s hair from the beginning.  Sara had been desperately trying to grow her fine limp hair so she could wear braids like all the other girls she knew.  In a rage over forgetting her book,  Lady Drume commits the unthinkable, Sara doesn’t think she will ever be able to forgive her.  But Lady Drume isn’t done with Sara yet and there is still so much traveling time left.
Sheila Garrigue was evacuated to Canada at 7 years old, and it is clear much of her shipboard experience in the U-boat infested Atlantic Ocean during the war made its way into this novel.  This was a somewhat unique adventure since overseas evacuations didn’t last long when ships, like the one here, were hit by torpedoes and sunk, killing some of the evacuees.
This novel is not really wonderful, though.  The characters fall a little short of being authentic, and often feel very stereotypical.  Lady Drume’s refusal to acknowledge the war and its dangers seemed odd given that she was going to Canada to organize a war relief drive and than back to England because “my country needs me.”  Sara, for all she didn’t like Lady Drume, continued to inadvertently get into trouble and then allowed herself to become a timid victim.  Neither character ever seems to learn how to operate in the situation in which she finds herself.
Oh, and as for the end of the story - let’s just say not very likely!
This book is recommended for readers age 10 and up.
This book was purchased for my personal library.
For more information on the Overseas Evacuation of Children, see visit The Second World War Experience Centre
All the Children Were Sent Away
Sheila Garrigue
Scholastic
1976
170 Pages
Posted by Alex Baugh at 8:19 AM