Greater than Angels by Carol Matas 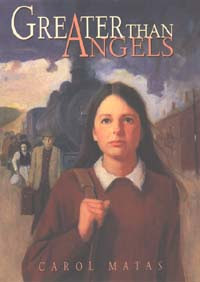 Though the story is fiction, this novel is based on a true story of the French village that hid the many Jewish children from the Nazis and helped to save their lives.
When the Nazis rounded up Anna Hirsch, 15, her mother, her Aunt Mina and her elderly Oma (Grandma) one night in October 1940, they feared they would be sent from their home in Mannheim, Germany to Dachau. But, instead, they were put on a train to Gurs in Vichy, France and put in a refugee camp there.
Conditions at the camp were deplorable. No bathrooms, sleeping on straw, always cold and hungry, sadly, it doesn’t take long for Oma to succumb to it all. But, at least, Anna’s friend Klara was there, too.
Almost a year after arriving at Gurs, Anna and Klara are given the opportunity to live in a children’s home run by the Swiss Red Cross in Le Chambon-sur-Lignon along with Klara’s brother Rudi and others, their mothers do not hesitate a moment about sending them, even though they know they will probably never see each other again.
At Le Chambon, the refugees are allowed to attend school and live a relatively normal life. They are even allowed to send and receive letter from family at Gurs and Anna even gets permission to return there to see her mother at one point. But as the war continues and things start to go badly for the Nazis, word comes to Le Chambon that the camp residents have all been deported east.
Eventually, conditions in Le Chambon become dangerous for the Jewish children. Anna and Klara find themselves on the run from the Gestapo who are looking for them, but they always manage to find a place to hid with the French residents, but they know that they can’t continue to run and a permanent solutions needs to be found or they will be arrested.
Anna and Klara are fictional characters, but they could have been any one of the over 3,000-3,500 Jews who were hidden and saved by local French residents of Le Chambon under the guidance of André Trocmé, a Huguenot pastor and pacifist.
Matas has written an interesting, realistic novel based on true events. Greater than Angles is a short, but powerful novel, at times filled with nail-biting tension  Yet, it is an extraordinary novel about courageous people - both the French who also risked possible death for sheltering the young Jews from increasing the danger of the Nazis and the young Jews themselves, whose will to survive is admirable, even in the face of unspeakable conditions and loss.
On a personal note, I particularly liked the many references to Berthold Brecht's The Threepennny Opera - an old favorite.
This book is recommended for readers age 12 and up.
This book was purchased for my personal library.
If you would like to read more about the Jewish children who survived in Le Chambon-sur-Chambon, please visit The United States Holocaust Memorial Museum to read their excellent article.
Greater than Angels