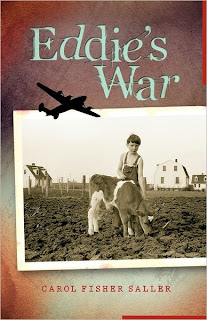 In Eddie’s War, Carol Fisher Saller explores the impact of World War II on a young boy living on a small farm in Ellisville, Illinois.  It is written as a series of dated vignettes, in verse, beginning in January 1934 and ending in November 1944.
Eddie Carl is the younger son of Wynton and May Carl.  In January 1934, Eddie is left at the library by his older brother Thomas, while he is at the barber shop.  Eddie sees a man reading the newspaper and when the librarian asks if she can help him, Eddie asks for a newspaper, too.
Over time, Eddie continues to read the paper in the library sitting across from the same man and learning about the events that will lead up to World War II.  In 1938 the man, Jozef Mirga, finally speaks to Eddie, asking him to help him read the paper to find news of his home in Poland, now that the Nazis were a threat to him family, who happened to be Gypsies.
Slowly the vignettes reveal how the people around him impact Eddie’s life, influencing the kind of person he will become as he grows up.  He learns a lesson in kindness when his brother is told to kill the growing baby foxes that he and Eddie had rescued, including Eddie’s favorite, Bitsy.  He witnesses how Thomas’s friend Gabe does what he can do to help friend Curtis Ray after he fell out of a tree, a foreshadowing of later his heroics.  He learns why his wise father refuses to give into Eddie’s begging for a gun before he is 12.  And about Eddie’s long term crush on Sarah Mulberry, starting at a young age, a wise choice given her own compassionate nature.
But hardest of all things is when his brother Thomas enlists after the US enters the war.  Eddie idolizes Thomas and worry about him, but at the same time he is proud of his brother piloting bombers over in Europe   And his disappointment when Thomas comes home and doesn’t want to talk about the war and his experiences.  Eddie, like most kids too young to fight, has romanticized the idea of being in a war and wants Thomas to confirm his ideas.  But, as with all wars, reality comes along and it is very different for Eddie.
Eddie’s War is a not to be missed story that is a poignant coming of age look into the world of one young boy during the war.  Saller based it on a diary that her father had begun as a 12 year old boy in 1944, but she says that Eddie is NOT her father, but some of the things that her dad wrote did make their way into the book as ideas.
I liked Eddie’s War a great deal, partly because over time I have done quite a bit of research on home front life in the United States, both in the city and the country and I found this to be a very realistic picture of what it was like.  And in the middle of all that is a young boy, trying to understand right from wrong, and understanding the courage it sometimes takes to do the right thing.
Carol Fisher Saller has a wonderful website about Eddie’s War, where readers and teachers can find information about the 1940’s and World War II as well as questions for discussion.  And as a real treat, there are copies of a page from her father’s diary and a letter he wrote to his older brother serving in the service.
This book is recommended for readers ages 10 and up.
This book was received as an E-ARC through netgalley.com