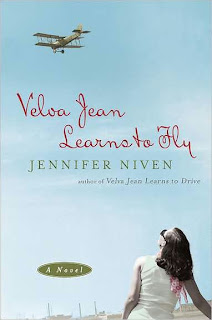 Velva Jean had married her preacher husband Harley Bright when she was 16. She saved as much money as possible and learned to drive, enabling her to leave this abusive marriage. When this sequel opens, Velva is driving her yellow truck from her home in Fair Mountain, North Carolina to Nashville, to realize her dreams of singing at the Grand Ole Opry. Her first day in Nashville, August 23, 1941, standing outside the Opry, a tall, striking woman hands her some money thinking she is needy. After the Opry lets out, Velva Jean finds the woman and returns the money to her. The woman, 26 year old Beryl Goss, or Gossie, takes her in, helps her get a job and introduces Velva Jean to Nashville life. The two become fast friends.

Life in Nashville brings other new things to Velva Jean. She teaches herself how to type, gets a job and bombards the head of the Grand Ole Opry with letters asking for an audition. She also receives regular letters from her husband, but refuses to open them and just puts them away.

On May 21, 1942, Velva Jean’s life changes completely when her brother Johnny Clay Hart comes to Nashville. Johnny Clay has signed up to be a paratrooper, but has some time before his training begins. Impatient to start, Johnny Clay finds a flying instructor to take him and Velva Jean up for her first airplane ride. Scared but thrilled, Velva Jean falls in love with flying and begins taking lessons in earnest. Her flying teacher considers her a natural, and when he hands Velva Jean a copy of Life magazine with an article about two government programs for women pilots, she determines that is what she wants to do, despite being too short, underage and under educated.

Undaunted, however, Velva Jean begins to inundate the head of the WASP program, Jacqueline Cochran, with letters asking for a chance anyway. In October, 1942, she is called in for an interview. In December, Velva Jean is accepted into the WASP program and in February 1943, she leaves Nashville for Texas and pilot training.

Needless to say, Velva Jean has a lot of adventures and experiences, in Nashville, on a visit home to Fair Mountain, in Texas and later at Camp Davis in North Carolina. Some of these involve the usual experiences of loss and love. What really stands out and is the most disturbing are the obstacles that women face while trying to serve their country. In reality, the WASPs really did face many obstacles. Flying was still relatively new, and women fliers were just not readily accepted. WASP experiences in Texas, at Avenger Field where they trained, were for the most part quite positive, as they are portrayed in this novel. But life was not always pleasant at Camp Davis, where male pilots resented the women who could do their job just as well or, sometimes, better, an did things that put their lives in jeopardy.

The characters and setting created by Niven in this novel are well developed and believable. The language is simple, but clear. My only complaint was that there may have been too explanatory. For example, I think there was sometimes more technical information about different planes than I could really understand. But these are minor, and could appeal to other readers. I enjoyed reading this book very much and was particularly grateful that Niven was able to keep Velva Jean from sounding like a southern stereotype, speaking with a vocabulary of nothing more than down home platitudes.

Velva Jean Learns to Fly is not really a YA novel, but is an adult novel that would have a great deal of appeal to many older teen readers. At 16, Velva Jean’s life looked like it was full of limitations. Two years later, it was full of possibilities and all because Velva Jean decided to take over the direction her life was going in. You could say, perhaps, that driving in the first novel is a metaphor for coming of age, but flying in this second novel is a metaphor for soaring. And Velva Jean is a wonderful example of that indomitable spirit that is the stuff of good YA novels, and that is so admirable.

I really liked this novel a lot and do recommend reading it. Velva Jean Learns to Fly can be read as a stand alone novel. References made to people, places or events that happened in Velva Jean Learns to Drive are not in the least a problem. Enough background information is provided to understand what is being referred to, but not so much that if you decide to read the first book it will be spoiled.

The book is recommended for readers age 14 to adult
The book was received as an E-ARC through netgalley.com

Find more information about the WASP program WASP on the WEB
(and be sure to check out the Arcade Games there, my person favorite was Dress the WASP)