I Am an American: a True Story of Japanese Internment by Jerry Stanley 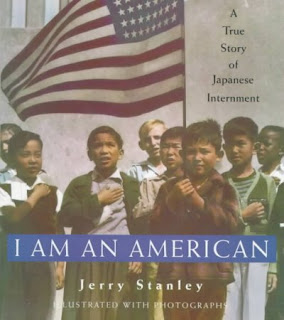 This is an interesting book that has a story within a story, both of which are true. It is an account of Japanese internment in general during World War II and of Shiro “Shi” Nomnura, a young man who spent part of his youth in the Manzanar War Relocation Center in southern California.

Shi’s parents had immigrated to the US in 1900 and, with hard work, had been successful farmers in California when the Japanese attacked Pearl Harbor on 7 December 1941. Immediately after the attack, friends, neighbors and even politicians were supportive of the Issei, Japanese citizens who had immigrated here, and their Nisei children, who were American citizens of Japanese descent. But within a short time, fear replaced support and yielding to pressure, President Roosevelt signed Executive Order No. 9066 on 19 February 1942. This order enabled areas within the US to be declared military areas, from which certain persons could be excluded. Japan’s military successes in the Pacific resulted in more distrust of the Japanese in the US and the eventual opening of 10 internment camps enabled by Roosevelt’s executive order, despite their constant demonstration of patriotism.

Shi was a junior in high school when Pearl Harbor was attacked and at first his friends were very supportive, but as violence against Japanese and their non-Japanese friends increased, support decreased. All things Japanese became suspect, and Mary Kageyama, Shi’s future wife, remembered how she had helped burn her mother’s sheet music “throwing stack after stack of Japanese opera’s on fine rice paper into the blaze” afraid it would be considered evidence of espionage activit(pg 20)  Families burned many irreplaceable heirlooms, documents and Japanese mementos to avoid suspicion. When it was decided that the Japanese needed to be evacuated to relocation centers, they were given very little time to dispose of their belongings, since they were only allowed to bring a small amount of personal items to the camps. The Nomura’s had one friend, Ruby McFarland, who proved to be a loyal and helpful ally to many Japanese families, offering to store what she could. Opportunists showed up and bought everything they could for very little money.

The camps were hastily and poorly constructed, and set up like barracks. The northern camps were unbearably cold in winter, the southern camps insufferably hot in summer and all in the middle of nowhere. There was no privacy anywhere, including the bathrooms and the grounds were surrounded by fences, barbed wire and armed guards. Nevertheless, Shi figured out how to make the most of the untenable and humiliating circumstances he found himself in. At one point, he traveled to Montana with other internees to help save a famer’s sugar beet crop, and while there, finding freedom and friends. When he returned to Manzanar, he found many changes. Some Nisei were allowed to leave the camp to continue their education. And the US had had to rethink its attitude of distrust regarding the Japanese when the Army realized they needed Nisei who knew Japanese to work in intelligence, plus more soldiers for the war. Nisei did go on to fight quite honorably for their country, yet, after the war all Japanese had to fight the lingering prejudice against them.

I found this to be a very informative in-depth book and definitely worth reading. Like slavery, the internment of Issei and Nisei was not one of this country’s finest moments, but it is important to see and understand how things sometime spiral out of control when all are held responsible for the actions of some. The writing is clear and concise, and the photographs of the people and events are relevant enhancements to the text, including some of Shi and his friends. Interestingly, Executive Order 9066 was not rescinded until 1976 by President Gerald Ford.

Shi’s wife, Mary Kageyama, was called the Songbird of Manzanar because she had such a beautiful voice and sang at some of the socials and outdoor concerts there. As of July 2010, she is still living and singing. Shi Nomura passed away on 17 July 2000 at the age of 80.

Manzanar is now a national historic site under the jurisdiction of the National Park Service. The website may be found at http://www.nps.gov/manz/ and there is an interesting virtual museum online. Shi Nomura, who was curator of this museum, collected many of the interesting artifacts relating to camp life that may be seen there. The Educator Resource Box is an excellent source of all kinds of teaching material on the subject of Japanese internment.

I Am an American was borrowed from the Muhlenberg Branch of the New York Public Library
It is recommended for readers aged 9-14.

Non-Fiction Monday is hosted this week by http://www.shelf-employed.blogspot.com/