One Thousand Tracings: Healing the Wounds of World War II written and illustrated by Lita Judge 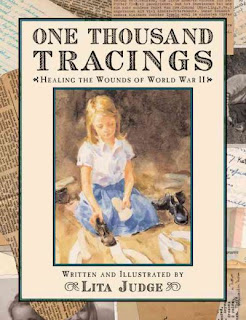 The invasion of Poland on September 1, 1939 is usually the date given for the beginning of World War II, and August 15, 1945, VJ Day, is considered to be the end of the war. But wars begin long before the first shots are fired and end long after the last ones are sounded. One Thousand Tracings is a story about the immediate aftereffects of the war. The author, Lita Judge, writes in the Author’s Notes that she had found a box containing hundreds of foot tracings in her grandmother’s attic and when she asked her mother about it, she was told the story that follows for the first time.

Her grandparents, Fran and Frederick Hamerstrom, had received a letter from friends in Germany around Christmas 1946 saying that they were starving; they had no food, no clothing and no shoes. Her grandmother packed up a box with canned goods, socks, sweaters and her own winter coat and sent it off to these friends, the Kramers in Germany. She received a thank you letter from Dr. Kramer, but he asked that she send no more to them, that others needed help too. In his letter were foot tracings of ten families in need of shoes. Again, shoes that matched the tracings were found and sent off. More and more names and foot tracings were added to the lists that were sent from Europe.

By June 1947, the Hamerstrom’s had the tracings of 1,000 feet. Lita’s mother and grandmother knitted in the evenings to send socks with the shoes and clothing, and collected hand me downs from anyone willing to donate. Mrs. Hamerstrom and her daughter searched for shoes or boots everywhere, including unclaimed shoes in repair shops. The shoes were cleaned, new laces were put on them, socks and other items were enclosed in the packages. This went on until, finally, by May 1948 conditions in Europe were much improved and there were far fewer tracings being sent.

In the Author’s Notes, Judge also writes that Fran Hamerstrom and her husband were ornithologists and that they were part of the effort that fellow scientists had started to help those in need after the war. Altogether, over 3,000 care packages were sent to 15 European countries, thanks to these scientists.

This is a short, but very moving story. Watercolor is one of my favorite mediums and the watercolor illustrations in this book, done by Judge, are quite lovely, with an almost impressionistic feel to them. In sharp contrast, Judge has included collages of the very real foot tracing, photographs and letters sent to the Hamerstroms from Europe. 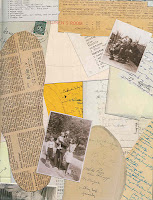 Lita Judge has an interesting website about One Thousand Tracings at http://tracings.litajudge.com/

One Thousand Tracings has received the following well deserved honors:


This book is recommended for readers’ age 5 to 9.
This book was borrowed from the 67th Street Branch of the New York Public Library.

* One of the people the Hamerstroms developed a lasting friendship with due to this project was Dr. Konrad Lorenz, who contributed to the theory of imprinting. Imprinting occurs when young birds or chicks become attached to the first moving object they see after breaking out of their egg. Anyone who has sat through a Psych 101 class may remember the pictures of Lorenz and the baby ducks following him around.


Non-Fiction Monday is hosted this week by http://connect.capstonepub.com/