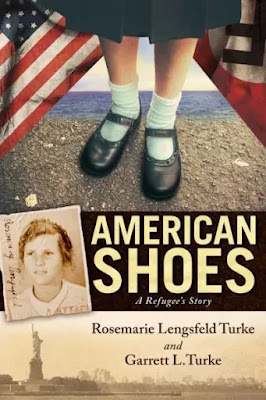 In 1930 Rosemarie Lengsfeld, affectionately called Rosel by her family, was born in New York City to parents who had emigrated to the United States from Germany and were awaiting their final citizenship papers. Despite that, they decided, in 1935 when Rosel was four-years-old, to return to Germany to visit family in Breslau. It was to be only a short stay, but lasted longer than expected, so when it came time to return to the US, the family discovered that their tickets would not be honored. Adolf Hitler, then Chancellor of Germany, had closed the borders so that German citizens could not leave the country. At first, Rosel enjoyed being with her extended family in Germany, and her parents soon welcomed baby Eleonore into the family. But when the war began, the family found themselves struggling to stay alive without enough food to eat amid bombing by the Allied Forces.

Finally, in 1946, with the war over, Rosel received a letter telling her she could return to the United States. Convinced that this would include her parents and now nine-year-old Eleonore, the family showed up at the American Embassy and were told only Rosel, 15, could return home, since she was the only American citizen - her parents and sister were German citizens.

Making a snap decision to go it alone and hopefully find a way to bring her parents and sister to the United States, Rosel finds herself traveling across the ocean on a 10 day trip aboard the SS Marine Flasher, a former troop transport ship along with other American citizens who were stuck in Germany and "surviving Jews and other displaced persons..." On board ship, Rosel meets the mysterious Liesel, another American with German parents, a few years older Rosel, who is traveling with her brother Kurt. She also meets David, a talented musician who lost his entire family in the Holocaust. As the ship gets closer and closer to the United States, Rosel begins to fear that no one will believe that she is American, that she will be branded as a Nazi because of her German accent.

It is during this journey at night when she is alone in her bunk bed that the reader discovers what life was like for Rosel, her family and others living under the horrors of Hitler's dictatorship before and during the war. Interestingly, she never talked about her experiences until she was 85 years old and therefore it is all based on her memories, but told in the first person from her 15 year-old perspective, and, in my opinion, making her something of an unreliable narrator. Even so, it's hard to imagine a 15-year-old making the kind of decision Rosel was forced to make that day in the Embassy, leaving her parents and sister behind, traveling alone to who knows what future, and at the same time, dealing with the trauma of the war as it returned night after night on the trip to the US. But Rosel's story is definitely one of courage and a different kind of true WWII story in that it is told from the point of an American child. It is often not an easy book to read, but I found it hard to put down.

American Shoes is a book that will appeal to readers interested in WWII, the post war experience, especially the experiences of Americans can in Nazi Germany, and war-related trauma. Back matter includes maps, a glossary, an author's commentary on WWI, WWII, and the Holocaust, and thoughts by the author's son about writing this book, as well as extensive Discussion Questions.