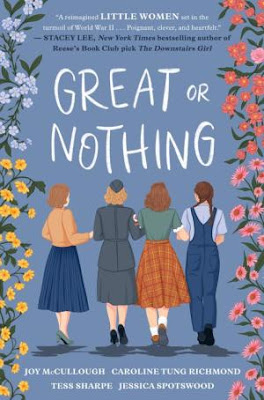 My first memory of Louisa May Alcott's Little Women is my older sister sitting in an easy chair in the living room and crying her eyes out while reading the book. When I asked why she was crying, she just said "You'll see." And I did indeed  discover why a few years later when I read Little Women in fourth grade. And I've never re-read it. But I have been enjoying some of the new retellings like So Many Beginnings by Bethany C. Murrow, More to the Story by Hena Khan, and Meg, Jo, Beth and Amy by Rey Terciero, among others. The latest retelling, Great or Nothing, takes place during a war like the original, but this time it is World War II.

The story begins in the spring of 1942. The United States has entered the war and people are still adjusting to the change. And that includes the March sisters, who are also still reeling from the recent death of their sister Beth. Now, their father is has enlisted as a Navy chaplain, Marmee is overly involved in charity work, and Laurie is a pilot stationed overseas. Laurie had asked Jo to marry him before he left, but she said no. Jo loved Laurie just not romantically. Then, she and Meg had harsh words. Jo couldn't understand why Meg would give up everything for math teacher John Brooke, and Meg couldn't understand why Jo had refused to marry Laurie.

Unable to write after Beth's death and needing to get out of the house after her fight with Meg, Jo is living in a boarding house, while working in a factory producing airplanes. But when she meets Life reporter Charlotte "Charlie" Yates, and helps her write a story about the airplane factory, she realizes that she also needs to sort out her feelings for Charlie.

Meanwhile, Meg is still at home with Marmee, continuing to teach, content to wait for John, whom Amy called "that boring old fuddy-duddy," to come home and to get married. But when an old "friend" decides Meg needs to party, to have some fun, and to meet other more exciting men, she begins to question whether she would really be happy in a quiet marriage with John.

Amy, who has been crushing in Laurie since she was a child, is supposed to be studying art in Montreal. Instead, unknown to her family, she has decided to join the Red Cross. At first turned down for being too young, Amy fortuitously finds another girl's application and uses that at another recruiting station, where she is accepted. After training, Amy is sent overseas with other recruits to work in a mobile canteen, where they serve coffee and donuts to American servicemen in London. And she runs smack into Laurie.

And Beth? She's there, a spectral poetic voice following her sisters adventures, providing insight, and giving unheard, unheeded advice about life in between the chapters.

Needless to say, as the story unfolds, it is clear that each sister has some big problems to deal with and some big challenges they need to overcome while navigating the war and their profound grief.

I really enjoyed reading Great or Nothing, finding it a thoughtful, appealing story that could be seen as simply a YA wartime romantic novel, but it is actually more elevated than that. Racial and sexist issues are introduced in both Meg and Amy's stories. Meg has a student who is Japanese American and Amy encounters an African American soldier who is not totally accepted by everyone, including Amy's friend Edie. And then there is Jo, who finally figures out who she is and why she didn't have romantic feelings for Laurie.

I also enjoyed some of the details included, like Victory Gardens, Victory Red lipstick, and of course, how women arranged their hair in Victory rolls, as well as the impact that shortages and rationing had on everyone. There isn't a lot of action to this story, but plenty of coming-of-age drama. And if I remember right, there wasn't much action in the original Little Women. I also felt that the original message about the importance of family bonds wasn't lost in this novel, even though the March sisters were scattered for much of the story. Sometime, you just need to get away from the security of home family to find yourself and appreciate what you have.

The story is told in alternating chapters, each character written by a different author who a different voice and point of view to each of the March sisters. In case you are wondering who wrote who - Beth is written by poet Joy McCullough, Amy by Caroline Tung Richmond, Jo by Tess Sharpe and Meg by Jessica Spotswood.

Lastly, there are some delightfully wonderful Easter eggs to be found throughout Great or Northing. Happy hunting!