Alias Anna: A True Story of Outwitting the Nazis by Susan Hood with Greg Dawson 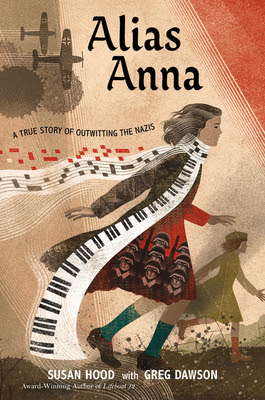 When her 13-year-old granddaughter Aimée wrote her a letter asking about what life was like for her when she was the same age in 1940, Zhanna Arshanskaya Dawson didn't know how to answer her. There was so many long-buried horrors, so much humiliation, so much running to escape capture by the Nazis. But a granddaughter has a right to know and so that part of her family's history unfolds in this gripping free verse biography.

Ukrainian born Zhanna was a headstrong little girl who used to love wandering the streets of Berdyansk, a resort town on the Sea of Azoz. One day, while wandering, she heard a small band playing music in a funeral procession and fell in love with what she heard. But the Arshanskaya home was already filled with the music of, among others, Rossini, Vizet and Tchaikovsky. Because Zhanna was so headstrong about wandering the streets, her father decided maybe piano lessons would rein her in. Soon the five year old was playing Chopin, Brahms and Beethoven. It didn't take long to realize that Zhanna had a true gift for music.

But Joseph Stalin, the ruthless dictator of the Soviet Union, had a plan to modernize Ukraine and get rid of the old ways through starvation - in what was the "breadbasket of Europe" people were starving to death as part of Stalin's Five-Year Plan. When Zhanna was eight and her sister Frina was six, the family, having hit hard times, was forced to leave Berdyansk to live in Karkov. Yet, despite now living in poverty, their father had high hopes that both Zhanna and Frina could audition for two spots with scholarships at a renowned music conservatory. Both musically gifted girls were immediately accepted and it was here that Zhanna found her signature piece, Chopin's Fantaisie-Impromptu. This piece of sheet music became her most prized possession, carried all through WWII.

Musically things improved for the family, but financially things got worse and then, in 1941, the Nazis attacked the Soviet Union and the country was officially at war. The Germans wanted all of the Soviet Union, but without its Jews. Shortly after arriving in Kharkov, the Nazis order Jews to gather in the center of town to prepare for evacuation. In snow and numbing cold, the Jews, now prisoners of the Nazis, were marched through the streets to an abandoned tractor factory. After a few weeks of living in abysmal conditions, the prisoners were rounded up and march to Drobitsky Yar. Suspecting what was about to happen, Zhanna's father bribed a young guard to let her escape. When the guard looked away, her father whispered "I don't care what you do. Just live." It was the last time Zhanna saw her parents, but not her sister.

Finding refuge at a friend's home, Zhanna was reunited with her sister. But Frina refused to talk about how she had gotten away and what happened to their family. Now, the sisters were on their own, and they could be easily recognized by the people in Kharkov who had been to their concerts. What they needed were new names and identity papers. But to get the papers, they would have to be admitted into an orphanage. It was easy to become Anna Morozova and her younger sister Marina, finding places in an orphanage was not so easy. But first, they had to get out of Kharkov.

Could the sisters survive the war, running and hiding from the cold-blooded Nazis and collaborating Ukrainians, doing what needed to be done to "just live" as their father had said?

Susan Hood has a way of making a person's history come to life in her lyrical, well-researched verse biographies (see Lifeboat 12) Reader's come away knowing not just Zhanna and Frina's struggles and how they were able to survive, but also some needed background history of the Ukraine under Stalin and later, Hitler.

Interwoven throughout the poems are quotes from Zhanna herself, taken from her oral history recorded by the William Breman Jewish Heritage Museum, as well as from interviews with her son, Greg Dawson. Other quotes used are well-documented in Hood's copious Back Matter. Most of Zhanna's story is written in free verse, I liked that Hood also included various poetic techniques and poetic forms, which always adds a certain level of energy and richness to a work written in verse that mirrors the musicality of the two talented sisters.

And, of course, there are recent events in Ukraine that make us realize that the past is never past. The attempted invasion of the independent state of Ukraine by Russia has brought not just the geography of this nation to the fore, but also some of its history dating back to World War II when the Nazis invaded. For example, knowing that the Russians had bombed Ukraine's Holocaust memorial at Drobitsky Yar and reading about it in this book made me that much more aware of the dangers of greedy dictators (Stalin, Hitler and Putin) and the 16,000 Jews who were murdered in that ravine, including Zhanna and Frina's family, where the now damaged memorial stands in Kharkiv.

Alias Anna: A True Story of Outwitting the Nazis is a true testament to the courage, cleverness, persistence, talent and strong will to survive of both Zhanna and Frina. And perhaps a warning from the past for us all to heed.