A Sunlit Weapon (a Maisie Dobbs Mystery #17) by Jacqueline Winspear 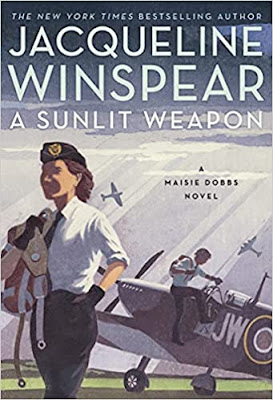 It's October 1942, and Maisie Dobbs is now Mrs. Scott, having married her American beau Mark Scott, investigator with the U.S. Department of Justice and not a political attaché in the American embassy. And now that the United States has entered the war, Maisie just might need her husband's help with her new case.

Jo Hardy is pilot with the Air Transport Auxiliary, or ATA, ferrying planes wherever they are needed in England. While flying a Spitfire to Biggin Hill in Kent, she heard a sound in the plane aft, as if she were hit by a bullet. Sure enough, circling back, Jo noticed a man standing outside a barn with a gun aimed skyward. A few days later, Jo and her friend Diana returned to the area, and to Jo's surprise, she discovered an African American soldier, Private Matthias Crittenden, bound and gagged. Taking him back to Biggin Hill, the soldier was immediately taken by the American MPs. It seems his white companion, Private Charles Stone, is missing and they think Mattias may have killed him.

Jo's fiancee had been killed when his plane had crashed in the countryside. Now, after being shot at herself, and then hearing that another ATA pilot had crashed on her way to Biggin Hill two days later, Jo has her suspicions about what might have happened. And she turns to Maisie Dobbs in hopes of getting some answers.  As she begins her investigation, there seems to be two plotlines going on - who is shooting at planes and what happened to Michael Stone.  And the more Maisie investigates, the more these two plotlines begin to come together.

Into the mix of plotlines comes Eleanor Roosevelt, in England to a goodwill tour and to meet with women doing war work, such as the pilots of ATA. This is a visit that Mark Scott is involved in, making sure that security is tight because there is a evidence of German plot to kill Mrs. Roosevelt.

At the same time, Anna, Maisie's adopted daughter, has gone from being a happy 7-year-old who loved going to school and had lots of friends there to being a clingy, unhappy child with bruises on her body and who has lost all her friends and no longer likes school. It is another problem for Maisie to get to the bottom of.

I found this 17th Maisie Dobbs mystery to be every bit as compelling and as rich and vibrant as the previous novels in this series. In fact, I actually found myself liking Maisie more and in a different way than she was in the previous books. Maisie seemed happier and less formal than before. Perhaps it is her American husband, and/or her adopted Italian daughter. whatever it is, I really like it.

And because the American military are now in England, it is a good opportunity to explore racism and  segregation in the United States, both at home and abroad. I thought Winspear did a pretty good job of showing how the English were accepting of Black Americans in ways that the US, including the military abroad, were not, but also how the English had their own issues about race when Maisie's daughter became a target because of her dark hair and olive complexion, and assumed to be something she isn't.

Winspear nicely brought in the work of the ferry pilots, showing the dangers these woman faced every time they got into a plane that carried no weapons they could use should they be attacked by a German plane, or even someone on the ground. And readers meet a group of Land Girls working on a farm to help with those chores. I was glad that the farmer they worked for turned out to be a good guy instead of one who took advantage of these young women. I loved all the little details Winspear threw in about both of these wartime jobs.

On the whole, A Sunlit Weapon is imminently readable and I am still amazed at how, after 17 books, each one still feels fresh and exciting. I can't wait to read #18.