Rescue by Jennifer A. Nielsen 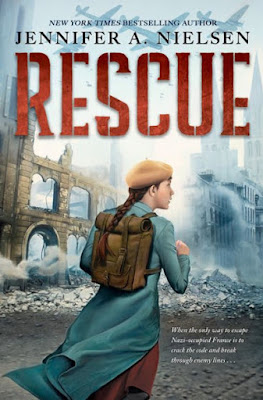 It's February 1942 and Meg Kenyon, 12, is living on her Grandmère's farm with her French mother in Nazi occupied France. She hasn't seen her English-born dad since he left in May 1940 after receiving a telegram from London and Meg believes he has been imprisoned by the Nazis, if he is even still alive. Before he left, he created a jar full of coded messages for her to solve - deciphering each other's coded messages was something they both enjoyed doing. Now, however, there was only one message left and Meg has been putting off solving it.

Meg has also been selling some of the vegetables from Grandmère's farm on the black market while secretly working for the resistance. When she unscrambles a message from them that reads Follow the German, Meg knows just who that is - newly arrived Lieutenant Becker, friendly upfront, cold-blooded underneath. And unfortunately, he now knows Meg's face now, after he figures out she was following him.

But Lieutenant Becker is temporarily forgotten about when Meg gets home and finds a badly wounded British officer, Captain Henry Stewart, in the barn, who claims to know Meg's father. After much sneaking around to help Captain Stewart, it turns out that he was on a rescue mission which he can no longer carry out. That's not all Meg discovers - it seems her mother has been working as a secret radio operator for the resistance.

It turns out that the rescue mission Captain Stewart parachuted into France to carry out involved three Germans, Albert, Liesel, and Jakob, posing as a family named Durand. Since Captain Stewart is too injured to carry out his mission, it is decided that Meg would lead the Durands to Spain and safety. Before she leaves, she is given a note from her father that Captain Stewart delivered, written in coded language. The next day Meg finds the Durands hiding in a cave where she also finds Captain Stewart's backpack full of spy paraphernalia and a warning not let anyone see what's in it. Fortunately, Meg was told that there are resistance workers along the way who are aware of the mission and can provide some assistance, but for the most part, the four are on their own.

As if their journey weren't difficult enough, Lieutenant Becker is on Meg's trail, suspecting her of resistance work. And just as they get to the point where they should head to Spain, Meg solves her father's message and insists they go to Switzerland instead. But why? And why would he say not to trust one of the "Durands" and which one?

Rescue is an exciting book, full of mystery, intrigue, danger, and betrayal. It's the kind of book my today self thinks is at time preposterous yet I know my 11/12-year-old-self would have hung on every word and every moment of danger. But my today self also knows that codes and ciphers were very popular during WWII, so it isn't surprising that Meg and her dad have their fun with them. Would I let a 12-year-old do what Meg is asked to do? Not a chance, but during the war, kids did this and more.

Captain Stewart was part of the Special Operations Executive (SOE), as was Meg's father, and he arrived in France with his bag of spy tools, including a spy manual, which Meg refers to often. I liked that Nielsen used the rules from the book for some of her chapter headings. Since they worked in so well with what happens in the chapters they head, I suspect it was a made up book, but fun nevertheless.

Nielsen has included a section called Secret Codes at the end of the novel for readers intrigued by them that includes all kinds of different codes they can try. I was one of those geeky kids who loved codes and secret languages growing up and still have a fascination for them.* There is also a section called The Special Operations Executive for readers unfamiliar with this organization created by Winston Churchill in 1940.

Rescue is an exiting book that should appeal to anyone who likes historical fiction about WWII that includes plenty of adventure and danger.

This book is recommended for readers age 9+
This book was an eARC gratefully received from Edelweiss+
*I'm pretty sure my fascination with codes and coding is how I ended up in Information Technology, creating programs and teaching kids and adults about computers.
Posted by Alex at 7:38 AM