We Must Not Forget: Holocaust Stories of Survival and Resistance by Deborah Hopkinson 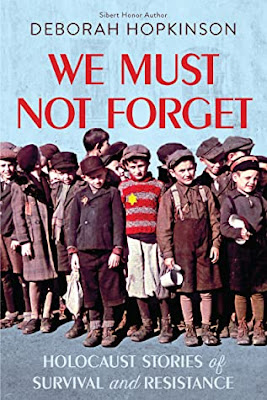 Exactly one year ago, I reviewed We Had To Be Brave: Escaping the Nazis on the Kindertransport by Deborah Hopkinson. In that book, Hopkinson used the Kindertransport stories of real children to show today's readers what life was like under Nazi oppression and the difficult choices parents had to make to keep their children safe.

Hopkinson's newest book, We Must Not Forget, looks at the ways in which Jewish children and teens survived the Holocaust despite the Nazis best efforts to rid Europe of its Jewish population. The book is divided into three parts, each part covering a country that the Nazis invaded and occupied. Part One: "Fleeing from Evil, Hiding from Horror" includes stories from Germany and the Netherlands; Part Two: "Families Torn Apart" looks at stories from France; and Part Three: "Desperation and Defiance" are stories from Poland. Within each part is a short introduction to each person, followed by pertinent key dates and a photo album relating to each individual country.

Using personal testimonies, letters, oral histories, memoirs and archival photographs, Hopkinson has provided a wide variety of experiences and perspectives on what each person profiled lived through. Hopkinson skillfully weaves these personal stories of each Jewish family with information about the rise of Hitler and the Nazis in Germany, and their invasion and occupation in the Netherlands, France, and Poland needed to understand the desperate fight to survive that Jews in those countries were in.

And fight they did. German teenager Fred Angress, living in the Netherlands with his family, was able to get a position with the Jewish Council after his father was arrested, never to be seen again. His job not only delayed Fred's own deportation, but Fred found ways to help as many Jews as he could, including smuggling them out of the gathering place where deportation began.

In France, Oeuvre de Secours aux Enfants or OSE homes where set up for Jewish children and teens where Alfred and Ernest Moritz went after a stranger told their mother to get them away from the registration line they were on where names and addresses of all Jews in their area were recorded and get them to safety. At the OSE home they went to, Alfred and Ernest were give false ID papers and ration cards. Ultimately, the brothers ended up living with a French peasant woman and passing for Christian until France was liberated.

Other children, like Ruth Oppenheimer and her older sister Hannah were sent to England on the Kindertransport. One brother was already living in South America, the other in the United States. Younger sibling Michael was rescued by a Quaker organization, and finally, younger sister Feo was taken to live in an OSE home. All six Oppenheimer siblings survived the Holocaust, but sadly their parents perished in Auschwitz.

Sisters Gertrud and Herta Michelsohn were deported from Germany to the Riga Ghetto in Latvia in 1941 with their parents. After their parents were sent to a death camp, the sisters found strength to go on with each other, even surviving a winter death march in 1944. Eventually, they ended up in Sweden, survivors of the Holocaust.

After her family was forced to move into the Nowogródek ghetto in what was then Poland, Paula Burger's mother made her promise to look after her little brother Isaac if anything happened to her parents. After they disappeared, Paula learned that her father had made arrangements to have his children smuggled out of the ghetto. One night, in the fall of 1942, that's exactly what happened. Paula and Isaac were taken to their father, where he was in hiding in the forest after joining the Bielski partisans. The Bielski's were a large family with 12 children. The partisan unit was formed after their parents and two brothers were killed by the Nazis. Led by eldest brother Tuvia Bielski, the partisans sabotaged the Nazis, blowing up trains and bridges, as well as going after collaborators and informers. Paula, Isaac, and their father remained in hiding with the Bielski partisans until July 1944 when the area was liberated by the Soviet army.

These are just some of the survivors readers will meet in this fascinating, well-researched book. Each of the 12 people profiled have their own unique story of survival to tell, though each lost loved one, killed by the Nazis. It's sometimes hard to grasp the magnitude of the Holocaust and its victims, but reading these eyewitness personal accounts helps to bring what happened closer to us now that so many survivors are no longer living. And thanks to Hopkinson's in-depth knowledge of the Holocaust, she is able to make what can feel like a very complicated subject much more comprehensible.

There are copious  photographs throughout each part, as well an invitation to "Look, Listen, Remember" at the end of each profile, where readers can listen to survivors tell their story. Extensive back matter includes a Glossary, a Timeline of WWII, a list of Museum Websites and Online Resources to explore, Oral Histories, Articles, and Interviews by and about the people in this book, an extensive Bibliography and of course, source notes (because Deborah is a truly consummate researcher).

And if you think these stories are just in the past, I would suggest you reconsider. After all, the past is never past. Nationalistic right wing extremism is on the rise in Europe and the United States and once again, Jews are being singled out. Let these stories serve an a reminder and a warning.

This book is recommended for readers age 10+
This book was gratefully received from the author
Posted by Alex at 1:00 AM