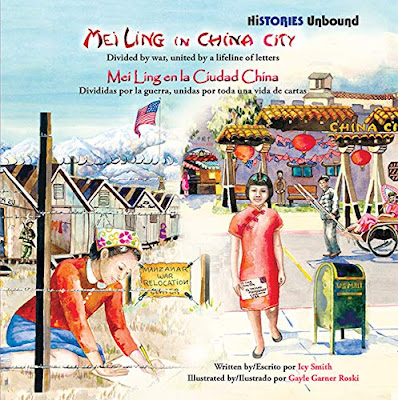 Mei Ling in China City/Mei Ling en la Ciudad China
written by Icy Smith, illustrated by Gayle Garner Roski
East West Discovery Press, 2020, 47 pages
An interesting story about the real life for one Chinese American girl in 1942.
It's September 1942, and Chinese American Mei Ling, 12, is missing her best friend Yayeko Akiyama. Because she is Japanese American Yayeko, her family and all west coast persons of Japanese ancestry have been sent to what the government calls relocation centers after Japan attacked Pearl Harbor on December 7, 1941 and the United States entered World War II. The Akiyamas were sent to the Manzanar War Relocation Center at the foot of the Sierra Nevada Mountains in California, she writes to Mei Ling. 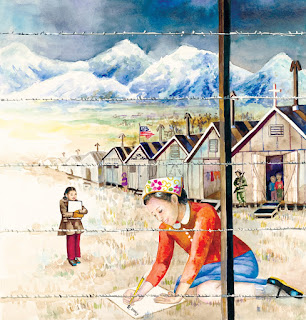 In their exchange of letters, Yayeko says she is bored in Manzanar, where there is no school yet, and she wakes up with dust all over her face every morning. No only that but she has not privacy - they live in a barracks, meals are in a mess hall, even the showers and latrines lacked privacy.
Mei Ling Lee, who lives in China City in Los Angeles, is getting ready to celebrate the Moon Festival. Putting on her red silk dress, so that she can help out in the family restaurant Chung Dat Loo, Mei Ling is sent on some errands.
First, she is to pick up more paper lanterns to decorate the restaurant, and then stop at the bakery for more moon cakes. On her way there, Mei Ling stops at the Kuan Yin Temple to say hi to her friend Johnny Yee. Johnny is selling fortune telling sticks and incense for seven cents to tourists. Later he will perform the traditional lion dance in the big Moon Festival parade. 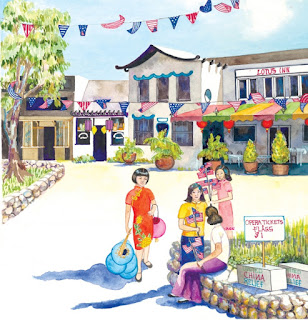 Mei Ling also runs into her friends Ruby, Francis and Doris selling American Flags and Chinese opera tickets for $1.00 to raise money for the United China Relief Fund to help the women and children refugees in China, suffering under Japanese occupation. Naturally, Mei Ling offers to sell some of both at the restaurant. The person who sells the most wins a new Chinese silk jacket and a $100. Chinese banquet gift certificate.
But when Ruby comes by the restaurant later, she tells Mei Ling that someone has already raised more than $70. and will probably win. Mei Ling decides to offer a free glass of orange juice with each flag and opera ticket. Setting up her stand outside the restaurant, she and Ruby are very surprised when Chinese actress Anna May Wong stops by for a flag and ticket, then pays with a $300. check making Mei Ling the winner. 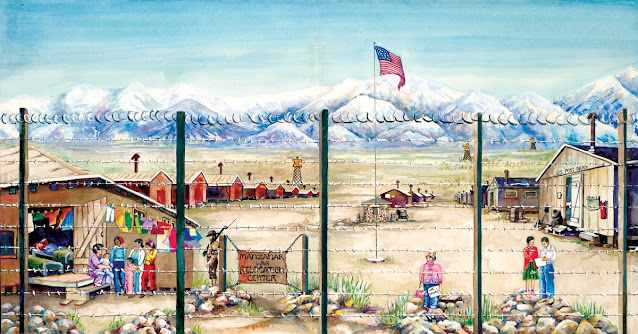 Mei Ling writes to Yayeko in Manzanar and tells her that she is giving her the new jacket and saving the gift certificate for when she returns home.
That is the basic story about Mei Ling, her friend Yayeko, and the day of the Moon Festival (which was September 24, 1942), but there is so much more information packed into the bilingual picture book for older readers. China City, where Mei Ling lives, was a bustling area before it was destroyed by fire in 1949. And you can practically draw a map of her day as she does her errands, but you don't have to because you will find one on the endpapers.
Many of the Asian Americans who lived in China City also worked as extras in movies, including Mei Ling and her friend Johnny Yee, and an  actors' agent, Mr. Gubbins, has his office there. So it may be why it is not surprising that Anna May Wong was at the Moon Festival.
There is so much more Chinese culture and tradition packed into Mei Ling's story. Much of it can be found in the phenomenal illustrations by Gayle Garner Roski (1941-2020). Though she wasn't of Chinese ancestry, her boldly colored watercolor illustrations and realistic settings throughout this book really capture what China City looked and felt like in 1943.
There is also extensive back matter that includes many photographs and additional information. Mei Ling and Yayeko lost touch over the years, but were reunited in their 90s thanks to the original publication of Mei Ling in China City in 2008
Besides this new bilingual English/Spanish edition of Mei Ling in China City, it is also available in English/Chinese and English/Japanese editions.
This book is recommended for readers age 7+
This book was borrowed from a friend
Posted by Alex at 10:33 AM