We Had To Be Brave: Escaping the Nazis on the Kindertransport by Deborah Hopkinson 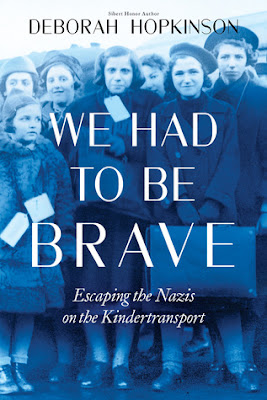 With the same attention to detail and straightforward writing style readers have come to appreciate from her, Deborah Hopkinson looks at how the rescue operation of Jewish children from Nazi occupied Europe, known as the Kindertransport, was able to saved approximately 10,000 young people.

In the first half of this fascinating history, Hopkinson details Hitler's rise to power and ties its impact into the lives of a number of Jewish families. Most people don't realize just how widespread anti-Semitic feelings were in 1930s Germany, but as Hitler became more popular, as his followers increased, many Jews who had believed themselves to be as German as their non-Jewish neighbors began to experience a definite change. For example, Jewish men were arrested and sent to concentration camps for no reason, prohibitions were enacted so that Jews in civil service lost their jobs, Jews couldn't go to the movies or visit a park, Jewish children were no longer allowed to attend German schools. But on November 9, 1938, when Nazis attacked and ransacked Jewish homes, business and synagogues, destroying everything in their path and arresting around 30,000 men, many Jews realized things were not going to get better.

You may wonder why didn't Jews leave long before Kristallnacht? She points out that many Jews believed they could ride out the tempest of anti-Semitism sweeping Germany, that it would soon blow over. But when many realized they had waited too long, and emigration became almost impossible as borders in other countries began to close, a chance for some parents to save their children opened up. Shortly after Kristallnacht, a plan was put in place in Great Britain to get "unaccompanied children up to the age of seventeen" out of Nazi occupied countries without the usual red tape. (pg. 142) The children were chosen from applications that were filled out by parents, often without the child's knowledge. I cannot imagine the level of courage it must have taken for these parents to send their children into the unknown, but I can certainly understand why they were willing to take the chance to get them out of harm's way.

To help the reader fully understand what the Kindertransport was, why parents would be willing to send their children away to live with strangers, most of whom were not even Jewish, Hopkinson uses the personal stories of a number of participants, a cohort group of different ages and backgrounds. Through interviews, written memoirs, and oral histories, as well as an abundance of relevant secondary material, the individual stories unfold, engrossing and increasing the readers understanding of just what these children lived through, before leaving Germany, what it was like traveling to England, and their adjustment to life in a different country, most without knowing even a little English.

Once again, Hopkinson has taken a complicated historical event and made it completely accessible to her young readers. And as if the stories of these Kindertransport children aren't compelling enough, she has included an abundance of secondary resources of readers. There are copious photographs throughout the book, as well as sidebars inviting readers to "Stop, Listen, Remember." Back matter includes information about the people in the book, the;  Survivors, the Rescuers, and the Historians; a Timeline; a Glossary; Look, Listen, Remember: Resources to Explore; a Bibliography; Newspapers, Articles, and Websites for more investigation; and of course, Source Notes.

I've read a lot of books about the Kindertransport, fiction and nonfiction, but this is by far one of the best. As Hopkinson parallels the rise of Adolf Hitler and National Socialism with the lives of Jewish families who ultimately chose to send their children to England, knowing they might never see each other again, she neither romanticizes nor loses her authorial objective eye so that a more complete picture of this little known but no less important historical event emerges.

The Kindertransport lasted only a short amount of time, from December 2, 1938 to May 14, 1940. The stories are harrowing, heartbreaking and although they took place 80 years ago, they couldn't be more timely for today's world, as people are yet again flirting with fascism.

I can't recommend We Had To Be Brave highly enough.

This book is recommended for readers age 9+
This book was an ARC gratefully received from the author.