Out of Hiding: A Holocaust Survivor's Journey to America by Ruth Gruener with Rachel Klein 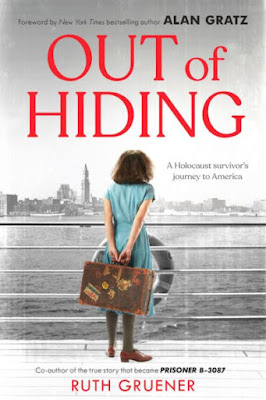 Anyone who has already read Alan Gratz's Prisoner B-3087 , the fictionalized Holocaust account of Jack Gruener, who survived 1 ghetto, 10 concentration camps, and 2 death marches, will also want to read Ruth Gruener's Holocaust survival story. Ruth was Jack's wife, but that came years after the Holocaust. And though Ruth never found herself in a concentration camp, her story is definitely harrowing, considering she was only five-years-old when the Nazis marched into her life.

Ruth was originally named Aurelia Gamzer and called Luncia for short. She was a happy chid living in Lvov, Poland with her parents, Barbara and Isaac Gamzer, who owned a chocolate shop. Restrictions on Jews were imposed, and soon Luncia couldn't go to school, Jewish people had to wear a white armband with a blue Star of David, former friends and neighbors turned their backs on Jews, and they were forced to turn over businesses, including the Gamzer's chocolate shop, and any personal property of value to the Nazis. Soon, Jews were put into a ghetto, followed by roundups and deportations and certain death.

When a former customer offered to hide Luncia. her parents decided to do that to save her life. After sneaking her out of the ghetto, Luncia found herself in a situation where she had to sit quietly without getting up or looking out the window, all day long. When a neighbor did see her through the window one day, the family first put Luncia in a burlap bag in the basement during the day to hide her, and late insisted she climb into a trunk and hide in there.

Eventually, it was discovered that her parents were in hiding with a former employee of their shop, and Luncia was reunited with them. But imagine what it must have been like to be a child and overhear your mother talking about ways to kill herself and her family. Fortunately, the person who was supposed to do this backed out at the last minute, saying he didn't have stomach for killing. Finally, in July 1944, Lvov was liberated by the Russians and the Gamzer family could come out of hiding.

But surviving the Holocaust and finally being able to come out of hiding and restart their lives presented a whole new set of problems. Since Gamzers had lost their extended family, their home, and their possessions, they decided to emigrate to America, where they did have some relatives. But the immigration process was slow and the Gamzers were displaced persons. Eventually, they made their way first to Krakow, and later to to the apartment of other Holocaust survivors in Munich. And it was there that Luncia first met Jack Gruener, who finally immigrated in 1947.

By 1948, the Gamzers were also still trying to immigrated and finally received their visas in 1948, sailing for America on January 7, 1949. Arriving in America, Luncia became Ruth. She begins attending high school in Brooklyn, NY and making new friends. But suddenly she is plagued with vivid memories of her life in hiding. But Ruth is determined not to let these memories control her life and reconnecting with with Jack Gruner helps. They eventually married and had two children.

Ruth Gruener's story about surviving the Holocaust, about spending her childhood living in a ghetto, than in hiding, living with constant starvation, even with a bout of severe frostbite, separated from her parents and knowing that the people she loved had been killed is one more story that helps us understand just what happened. She describes her experience in a very detailed, matter of fact manner, but underneath you can still feel the horror and pain she lived through. 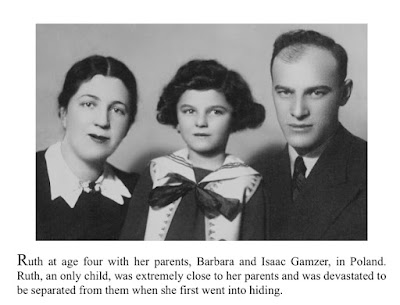 I found it interesting that her father had the idea of hiding family photos in a jar and burying it was brilliant. After the war, before they left Lvov, he dug them up, untouched by war and nature. Those family photos must have felt like such a great gift after losing everything else. And thankfully, Ruth shares them in her book.

This book is recommended for readers age 9+
This book was an eARC gratefully received from Edelweiss+
Posted by Alex at 9:10 AM