Andrew Higgins and the Boats That Landed Victory in World War II by Nancy Rust and Carol Stubbs, illustrated by Brock Nicol 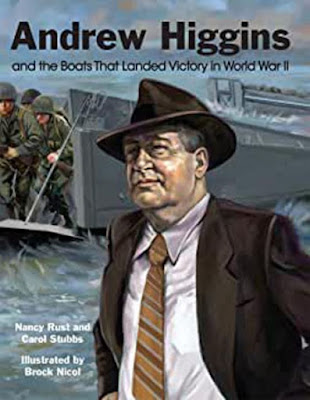 Andrew Higgins and the Boats That Landed Victory in World War II
written by Nancy Rust and Carol Stubbs,
illustrated by Brock Nicol
Pelican Publishing, 2020, 32 pages
How many times have we seen photos or film of that pivotal day, June 6, 1944 and the Normandy landings during WWII and focused only on the brave soldiers storming the beach, without giving a second thought to the odd looking boats that brought them there? Now you can get to know the man who delivered those soldiers and their equipment to the beaches of Normandy and who helped bring about the end of the war. 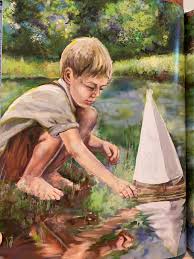 Born in 1886 in Columbus, Nebraska, Andrew Higgins always loved boats, but and he loved a good challenge. When he was 12, Andrew built his first boat, a wrecked sailboat he found in the river by his house. Yet, after all his hard work, he found his rebuilt sailboat was too slow for his taste. So, he challenged himself to build a bigger, faster boat. Speed seems to have had a great deal of appeal to Andrew, but school didn't and so he quit and became solider, then a farmer, a truck driver, and later owned a lumberyard. But nothing satisfied him.

Andrew began designing boats when he opened a lumberyard in New Orleans, and needed something that could move his cut trees through the shallow waters there. Another challenge for Andrew, who designed a flat bottom boat to do the job. Naturally, as the lumber business slowed down, boat building became Andrew's main focus. In fact, he built such great boats for those shallow waters that his landing boats, a/k/a Higgins boats, could "crunch through driftwood, bounce over logs, climb a beach, ...wham up on a sloping concrete sea wall." They were so good that more and more people wanted them.

During WWII, Andrew made all kinds of boats for the military, including PT boats and Higgins boat with its drop down ramp that could be used for transporting soldiers and heavy equipment like tanks from large ships to beach shores. Andrew had to hire more workers to build his boats, and because he believed in a workforce that was diversified and treated people fairly, he hired women, people of color, then started a childcare center and a free clinic. Not only that, he paid equal pay for equal work. Andrew Higgins and his boats were a success story on the home front as well the as the fighting front lines. 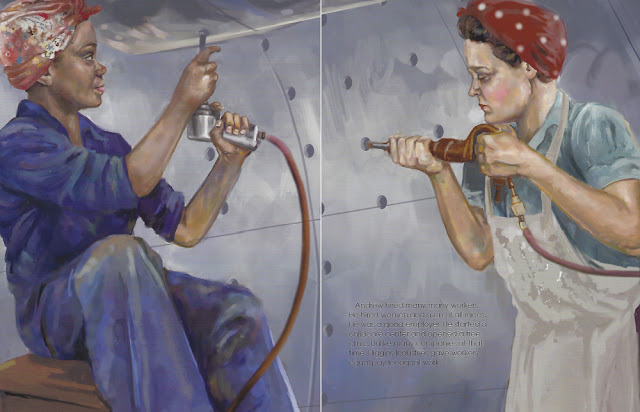 Thanks to the Higgins Boat and their ability to move soldiers and large equipment even under the harshest circumstances, wars would be fought differently from then on. After the war, President Dwight Eisenhower said that Andrew Higgins was "the man who won the war" thanks to his Higgins Boat. 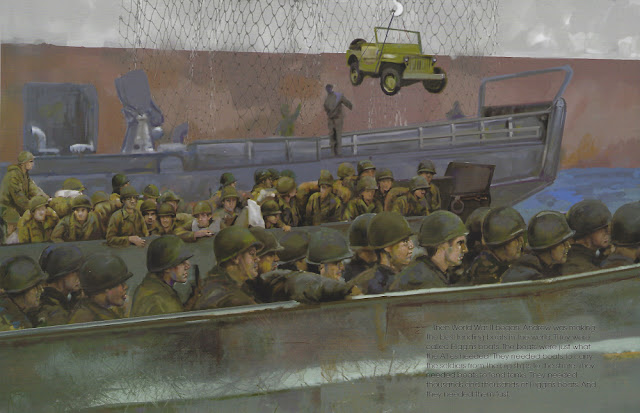 I had never heard of the Higgins Boat, even though pictures of it are so common. Yet, when I asked a friend whose father was in the Navy if she ever heard of a Higgins Boat, she knew exactly what it was and role it played in WWII, but she didn't know anything about the man who designed it. Hence, the need for a well done biography like this one. And in fact, I found Andrew Higgins and the Boats That Landed Victory in World War II not only informative, but really interesting.

I loved this well-written, accessible picture book for older readers, but besides excellent writing, the text is extended and enhanced by the very detailed, very realistic painted illustrations by artist Brock Nicol. He chose a bright palette for the images of Andrew growing up and seeking his passion, and switched to a palette of army greens and browns for the WWII images. I think he really captured Andrew Higgins' life and his work as befits an American hero.

Back Matter includes a Glossary, an Author's Note, and a list of Important Dates in the life of Andrew Higgins. You may also want to watch this interview from September 2020 with authors Nancy Rust and Carol Stubbs by curator Josh Schick at The National World War II Museum in New Orleans

This book is recommended for readers age 7+
This book was an F&G gratefully received from the authors.
Posted by Alex at 1:00 AM