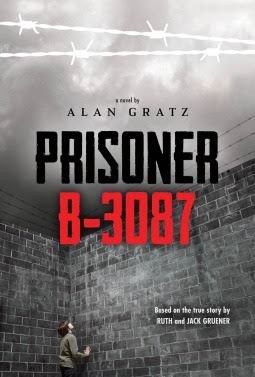 Imagine surviving 1 ghetto, 10 concentration camps and 2 death marches.  Well, here is the story of a boy who did just that.

At 10 years old, Yanek Gruener's life means friends, school and most importantly, being surrounded by loving relatives all living in the center of Krakow, Poland.   But his relatives know that soon something is going to happen - after all, they are Jews in a Europe that Hitler wants to make "Jew free."  Sure enough, only six days after the German invasion of Poland, Nazi soldiers march into Krakow, and not long after that, one after another rights, privileges, pleasures, food and freedom are denied its Jewish citizens, until, in 1942, when Yanek is 12, the Nazis begin building the wall that will become the Krakow Ghetto and Yanek soon finds himself living there along with thousands of other displaced Jews.

In the ghetto, Yanek and his father prove to be very resourceful in order to survive.  When roundups start, to avoid be sent "to the east" and an unknown future, Yanek finds an abandoned pigeon coop on the roof of their building where the family takes up residence.  To feed his family, Yanek's father manages to get bread under very dangerous circumstances.  And, most telling of all, despite the danger after the Nazis forbide Jews to practice their religion, his father gets together a minyan (a quorum of 10 bar mitvahed men) late one night for Yanek's very unusual secret bar mitvah.

The ghetto proves to be only the beginning of Yanek's journey through a system of concentration camps, where survival sometimes depends of cunning, sometimes on luck, always knowing that your life is in the hands of sadistic Nazis, some of whom like to kill Jews for sport.

By the time Yanek is sent from the ghetto to the first of ten concentration camps, he has lost his family in a roundup and deportation heading "east" but finds his Uncle Moshe at Plaszów Concentration Camp.  You may remember Plaszów from Schindler's List, the camp run by the very, very cruel SS Commander Amon Goeth.  It is here that Yanek's Uncle Moshe teaches him survival skills that will  serve him well at each camp he is sent to.  As a result, Yanek's resolve to survive almost never falters, even when he comes very close to dying.

Prisoner B-3087 (B for Birkenau) is based on the life of the real Yanek/Jack Gruener.  It is told in a simple, straightforward manner, narrated in the first person by the fictional Yanek, but the voice of the actual Gruener comes through clearly, giving it a sense of authenticity.  Yanek never, no matter how badly he is treated, gives into feeling victimized, which is amazing, but may also account for his strong will to survive.  Yanek's descriptions of certain things that he either witnesses or that were done to him are sometimes a bit hard to read, but never gratuitous and not including them would sanitize Nazi cruelty to every degree.

The narration skillfully balances these cruel, sadistic acts against the Jews with some real heartwarming moments, like the night of Yanek's secret bar mitvah, a kindness Yanek was to repay in Birkenau two years later when he is the first to volunteer to be part of a minyan for another 13 year old boy's forbidden bar mitvah, even though getting caught would mean certain death.

After I read Prisoner B-3087, I felt compelled to do two things.  First, I had to make an outline of the places and events in Yanek Gruener's life as he was sent from camp to camp, sometimes in cattle cars, sometimes on foot in freezing weather.  Second, I would have liked a map to get a real sense not just of where Yanek was at each part of his life under the Nazis, but also the distances he traveled.  I think these would give a real appreciation of his survival.  But since they didn't include map, and others might  fell as I do, I found this one at the Jewish Virtual Library and modified it a bit to reflect Yanek's experience:


Prisoner B-3087 is a book that really must be read to be fully appreciated.  Yanek/Jack Gruener's story is incredible, haunting, compelling, heart wrenching, rewarding and not to be missed (and you will find out how Yanek became Jack).

This book is recommended for readers age 11+
This book was received as an E-ARC from Net Galley
Posted by Alex at 8:01 AM

Email ThisBlogThis!Share to TwitterShare to FacebookShare to Pinterest
Labels: Coming of Age, Holocaust, Poland, YA