Saving Hanno: The Story of a Refugee Dog by Miriam Halahmy 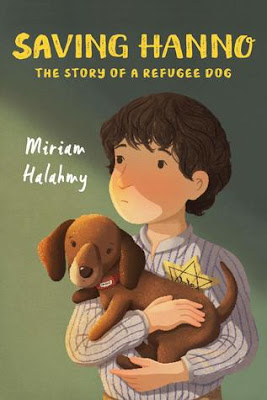 It's November 1938, almost two weeks after Kristallnacht, and life is getting even more difficult for German Jews. For Rudi, 9, it means being picked on by the Hitler Youth boys in his Frankfurt school and now his kind teacher has been replaced with a cruel Nazi teacher. That afternoon, Rudi and his best friend Emil skip school and never return. By January 1939, Rudi and his older sister Lotte, 16, are pretty bored being at home, but when he is told that they will be traveling to England to live with a couple there, he doesn't want to leave his parents. The worst part is that Rudi will not be able to take his beloved dachshund, Hanno, with him. Now he really doesn't want to leave. Luckily, someone volunteers to take Hanno to England and put him in quarantine, then if all is well, he and Rudi will be reunited.

That makes leaving home a little better, but Rudi still doesn't want to leave his parents. Besides, he doesn't speak any English and then he learns that Lotte won't be living with him, that she'll be with another nearby family.

The couple Rudi lives with, Auntie Irene and Uncle Don Evans, are very kind and patient, but Rudi is reticent to speak English. They do seem to know that he can't eat pork, so that isn't a problem though Rudi does miss Friday night Shabbos with his parents and Lotte. What he really worries about is school. What if the kids there don't like Jewish German boys and are mean, picking on him the way the Hitler Youth always did. But Rudi immediately makes a friend, a genial boy named Sidney Scudder. And through Sidney, Rudi makes even more friends.

Things are really great when Hanno comes out of quarantine. Rudi takes him everywhere during summer vacation and all the kids love him. But as summer goes by, England going to war with Germany becomes more and more of a possibility. In September 1939 war is declared, and the possibility of losing Hanno looms again. It seems the everyone is have their pets put down because of the war and rationing. When Rudi hears Uncle Don and Auntie Irene talking about having Hanno put down, Rudi knows he must act to save his beloved dog's life. But what can he do? Perhaps Sidney has an idea.

Saving Hanno is a story about an aspect of World War II that most people don't know or just don't want to think about. But the act of putting pets down was quite widespread at the beginning of the war in Britain. Pets weren't allowed in shelters, and rationing meant little left over for feeding a pet. This is the dilemma that Rudi faced with Hanno. After all he had given up - his home, his parents, to some extent even his sister - how could he give up his beloved Hanno, this time with no hope of getting him back?

Besides depicting the fate of one beloved pet, Saving Hanno also illustrates two different situations that Jewish kids who were sent to England on the short-lived Kindertransport (1938-1940). Rudi is very welcomed by the childless Don and Irene Evans, who show consideration for his dietary needs,  as well as just treating with kindness and understanding. Lotte, on the other hand, ends up in a family that treats her like a free servant, keeping her out of school and giving her only one day off a week. One can only imagine what other situations the Kindertransport children found themselves in.

Throughout his stay in London, Rudi never loses hope that his parents will find a way to leave Germany and get to England. To keep that hope alive, he keeps a notebook of things they might find helpful once they arrive. I thought it was a sweet touch, but also lets readers know some of the day-to-day things Rudi faced as a refugee.

After I finished reading Saving Hanno, I discovered that Miriam Halahmy had written an early book called The Emergency Zoo, a longer novel that is about the saving animals about to be put down because of the war. Now, I can't wait to read it. Saving Hanno is an ideal book for kids in the early middle school grades, while The Emergency Zoo looks to be a book for kids in later middle school.

I think Saving Hanno is a story that kids will definitely like.

This book is recommended for readers age 8+
This book was purchased for my personal library
Posted by Alex at 12:18 PM