Strongman: The Rise of Five Dictators and the Fall of Democracy by Kenneth C. Davis 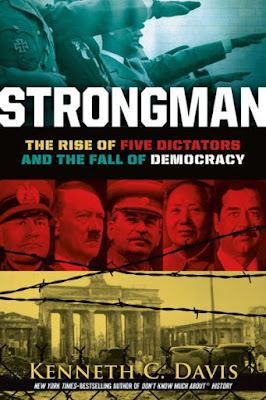 Germany's constitution, written at the end of WWI, was one of the most democratic charters ever produced. It isn't surprising, then, that Kenneth Davis begins his comprehensive history of five 20th century dictators with the story of how Adolf Hitler used Germany's new democratic constitution to become the absolute ruler one of the world's most repressive and destructive governments - and the way it was done was completely constitutionally correct.

Davis then devotes a chapter to the history of democracy from antiquity to the American Revolution, pointing out just how fragile the concept of democracy is, especially when its enemies seek to dismantle democratic governments and solidify power for themselves. What follows is a biography of five dictators, Benito Mussolini, Adolf Hitler, Joseph Stalin, Mao Zedong, and Saddim Hussein, and their power grabs.

Davis shows that in their early lives, none of the Strongman - dictators who used any and every means possible to acquire power - showed any sign of what they were to become. Most had nondescript early beginnings, often with doting mothers and cruel fathers. Yet, all became charismatic figures, convincing people to support and follow them and to even commit atrocities in the name of their individual ideologies.

Following a short biography of their early lives, Davis traces the influences surrounding their rise to power, their seizure of power and their political philosophies for ruling their respective countries. Davis shows how each used propaganda to manipulate their citizens. For example, Mussolini recognized the need to control mass media and the beneficial use of fascist propaganda films shown in movie theaters, a lesson that the other four dictators learned all to well. And all found it important to mobilize young people with an eye to the future, such as the Mussolini's Vanguards, the Hitler Youth, Stalin's Young Pioneers, Mao's Red Guard, Hussein's Lion Cubs.

Davis don't analyze these five dictatorships, nor does he compare them to each other. Rather, each is designed to serve as a warning - democracy can disappear so easily, all it takes is one antiestablishment populist leader claiming he speaks for the people and promising to return power to them. As Davis shows, they begin to dismantle democracy and move towards authoritarianism and he gives for warning signs:
1- Rejection of the democratic rules of the game;
2- Denial of the legitimacy of political opponents;
3- Toleration of encouragement of violence;
4- Readiness to curtail civil liberties of opponents, including the media.
If these warning signs so familiar or recognizable, you can see why this is not just an important historical lesson, but a timely work of our own time.
But Davis doesn't leave the reader feeling helpless in the face of a potential charismatic dictator. Indeed he gives the reader a blueprint of the Strongman's playbook for getting power and what to expect once he is in power. Most importantly, Davis tells the reader not to fall into the trap of thinking it can't happen again - because it can.

At the beginning of each biography, readers will find a time line tracing each dictator's life in the context of the place and times in which he lived and his rise to power. There are also a wide range of photographs throughout the book. Back matter includes an extensive Bibliography, including general and dictator-specific reading for further investigation.

Davis has written an very readable, very relevant work that easily serves as a jumping off point for anyone interested in government, politics and the rise and fall of political systems.

This book is recommended for readers age 12+
This book was gratefully received from Casey Blackwell at Media Masters Publicity
Posted by Alex at 3:17 PM