Just when I thought I had pretty much covered all the popular Christmas music from WWII, I discover another song. Unfortunately, I couldn't find much about this song, since NYPL Performing Arts Library, my main source for musical information, is closed because of the pandemic, but I did find out a few interesting tidbits.
I'm Sending a Letter to Santa Claus was written by Spencer Williams and Lanny Rogers. Williams was an African American, who was born in New Orleans and known for his blues music. Williams suffered from wanderlust, and lived in Europe for a while. He was living in England when he wrote I'm Sending a Letter to Santa Claus with Lanny Rogers and according to Billboard, it was one of Spencer Williams' most popular songs. I couldn't find anything out about Lanny Rogers.
I'm Sending a Letter to Santa Claus was first sung by Gracie Fields in France at a troop concert in 1939 and became a big hit for her. In fact, the sheet music sold over 750,000 copies in the month before Christmas. It was also recorded by Vera Lynn in 1939, which you can listen to below. 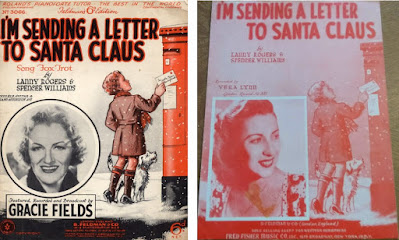 And here are the lyrics to I'm Sending a Letter to Santa Claus, in case you want to sing along:
I met a little fellow with a letter in his hand,
He asked me if I'd post it in the box for Fairyland.
I slipped it in the mailbox for that little curly head,
It seemed to make him happy very happy as he smiled and said
I'm sending a letter to Santa Claus.
My letter I hope he'll receive.
Oh, I wonder if he will please remember me
When he calls on Christmas Eve.
(refrain)
He'll get a lot of letter for playthings
From other girls and boys.
But I want my soldier daddy,
He's better than all the toys.
And so I'm sending my letter to Santa Claus
To bring daddy safely home to me.
Posted by Alex at 11:40 AM