Thirteen Doorways, Wolves Behind Them All by Laura Ruby 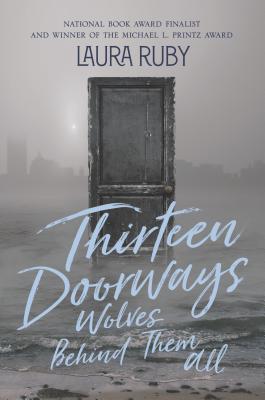 This is the story of Francesca "Frankie" Mazza, narrated by Pearl, a teenage ghost who feels just a little bit closer to life when she is around Frankie. Frankie is a 14-year-old Italian American living in an Catholic orphanage run by the Sisters of Our Lady of Perpetual Sorrow in Chicago with her younger sister Toni and her older brother Vito. The Mazza children aren't orphans, but were placed in the Guardian Angels Orphanage by their father, a shoemaker, after the death of their mother. And every visiting Sunday, he showa up bearing meatball sandwiches, spaghetti with butter, a apple for each and sometimes a new pair of shoes. Then one Sunday, he visits with news that he and his new wife would be moving to Colorado, and he would be taking Vito with him, but leaving the girls at the orphanage.
Left behind, and missing Vito, Frankie withdraws into herself for a while, at which point Pearl's story begins to unfold. Pearl is convinced she died as a result of the 1918 influenza pandemic that swept the world. And she has acquired a ghostly fox for company as she roams around the orphanage, the shores of Lake Michigan, reads The Hobbit over the shoulder of a library patron, where Pearl meets Marguerite, an African American ghost who can actually knock books off shelves. Like Frankie and Pearl, Marguerite also has a tragic story and also like them, her story slowly unfolds.
Once Frankie begins to join her friends again, she finds herself working in the kitchen, preparing meals for the nuns. And that's where she meets and falls in love with Sam. And the feeling is mutual. But Sam is almost 18-years-old and once war is declared in Europe, it is just a matter of time until, like Vito, he is drafted and sent to fight Hitler.
When the nuns discover what went on between Frankie and Sam, she is harshly punished, and then she and Toni are kicked out of the orphanage. Living with their father, their stepmother, and three of her children just may be a deal breaker for Frankie.
Thirteen Doorways doesn't just take the reader on a journey through the problematic and tragic lives of Frankie, Pearl, and Marguerite, to their individual ends, it also challenges the reader to think about the doorways we are confronted with in life and what might lie behind them. As events in their lives are recalled, as doorways are opened, wolves are revealed. Do we open the door and go through, not knowing what can happen, but taking control of our lives and our experiences or do we deny ourselves agency, staying ensconced in a life not really lived, however abusive and unhappy it may be?
Ruby has written a novel that is populated by a whole host of characters besides Frankie, Pearl, and Marguerite, who all play a part in their stories to greater or lesser but always relevant degrees. In doing so, to my mind, at least, Ruby just may have redefined the old Henry James' notion of the "loose baggy monster' and given it dignity and literary value.
Though not a book about WWII, it does, nevertheless, frame the world that Frankie lives in and the world that Pearl haunts. And in doing so, Ruby gives the reader some real insight about what life was like during those years, especially for poor Americans.
I began reading Thirteen Doorways slowly, much more slowly than I usually read books, savoring every word. But I found Ruby's writing so beautiful, so lyrical, so mesmerizing that it didn't take long before I realized I couldn't put it down. It may not be everyone's cup of tea, but for those who like this kind of tale, I can't recommend it highly enough for so many reasons.
This book is recommended for readers age 13+
This book was purchased for my personal library
Posted by Alex at 11:42 AM