Lizard in a Zoot Suit by Marco Finnegan 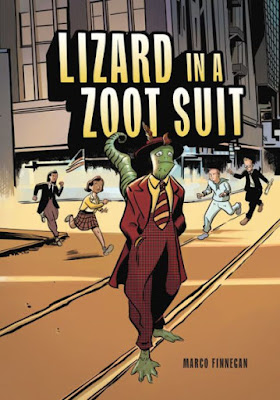 It's June 3, 1943 and twin Latinx sisters Flaca and Curata have just stumbled upon Dr. James Rogers, a naval geophysicist and a few sailors digging in their Mexican American Los Angeles neighborhood of Chavez Ravine. After almost getting into a fight with the sailors for lewd remarks directed at Curata, the sister return home. Later that night, after their mother falls asleep, the girls take the family pickup truck and head to downtown Los Angeles to hangout and party with friends, all of whom are part of the city's Zoot-suit culture. But when a sailor bumps into Curata, a fight begins.

Some of the sailors chase Curata into a dead end alley. Scared and with no place to escape, a manhole cover opens and a large lizard-like creature climbs out and scares the sailors away. When Curata faints, the lizard takes her into the underground tunnel he came out of, followed by Flaca. And unknowingly also followed by one of the sailors working for Dr. Rogers, who immediately calls the scientist.

The lizard doesn't speak, but seems to understand Curata and Flaca and takes them home through the tunnel. It turns out that the creature, whom they call Chulito, has become separated from his family. The next morning, they decide that he should be reunited with them, if they are even still alive. After all, they understand separation and loss, they lost their dad, a soldier, in the war. But the night before, police and servicemen beat and arrested the mainly Mexican American Zoot-suiters in Los Angeles, resulting in the start of the Zoot Suit Riots.

Deciding to disguise the lizard, they put him in one of Flaca's Zoot suits. But before they even leave their neighborhood, they encounter Dr. Rogers and his sailors looking for Chulito. A fight ensues between the sailors and the Flaca and Curata's other Zoo-suit friends, but the sailors manage to capture the lizard. Desperate to get him back and help him find his family, the sisters get some help from a very unexpected person. But will they find Chulito?

Done in two tone panels of black and yellow, Lizard in a Zoot Suit is an interesting look at a particular time and place in history. At first, it seems like just an excitying historical science fiction story, until you discover that some of it is based on reality. Curata and Flaca are great characters. Curata wears skirts that she's rolled up to make shorter and has a real soft heart for animals, which is why Chulito appeals to her so much. Flaca has a hot temper when it comes to racist remarks, especially when directed at her and her sister, which is how she sometimes gets into fights, and dresses in Zoot-suits when they go out. Both are proud Mexican Americans, proud of their father's service despite losing him, and both are kind, caring teens.

Right from the start, readers will know that Dr. James Rogers is a smarmy corrupt scientist looking to make a fast buck and a claim to fame on the back of Chulito, and the sailors he gets to help are all white and racists, and all to happy to go after Zoot-suiters with their fists.

The result is a graphic novel that brings together the 1943 Zoot Suit Riots, the legend of an underground reptilian race living in tunnels under Los Angeles, and the treatment of the Latinx community displaced by housing discrimination.

Written in English, Finnegan throws in lots of Spanish, most of which is easily understandable by context alone. I did look up pachucas, which in this case means Zoot-suiter.

Pair Lizard in a Zoot Suit with Margarita Engle's verse novel Jazz Owls: A Novel of the Zoot Suit Riots for another perspective of Los Angeles' Zoot Suit culture and riots.

You might also be interested in reading about how author Marco Finnegan can up with the idea for his graphic novel. You can find it HERE

And you might also like to read about the real person looking for the underground reptilians. You can find it HERE

This book is recommended for readers age 13+
This book was purchased for my personal library
Posted by Alex at 12:17 PM