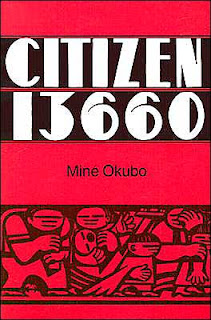 When I was a kid, I read comic books, lots of them and all kinds – everything from Archie to Superman. So I know the power of putting together graphics and text. And I have to confess, that when I was in school, we could still find Classics Illustrated* in second hand comic stores and I may have actually used one or two of these for book reports. But today, all kinds’ graphic books are available, of considerably better quality than Classics Illustrated were and very popular among readers of all ages. Now, more and more graphic books are being written and published that cover important aspects of history and, in the same way Art Spiegelman’s Maus books are used in schools to study the Holocaust, Miné Okubo’s Citizen 13660 is an ideal vehicle for presenting a different aspect of World War II to students.

Miné Okubo was studying in Europe on an art fellowship when war was declared in 1939. She managed to get herself to the home of some friends in Berne, Switzerland and after a long wait and many difficulties, finally obtained the necessary papers she needed to travel to France. From there, she set sail for the US on the last boat out of Bordeaux. Shortly after Miné arrived back in the United States, her mother passed away and she went to live with her brother, a student in Berkley, California.


Things went well for them, even when the US declared war on Japan after the attack on Pearl Harbor on December 7, 1941. But as suspicion and fear grew, President Roosevelt was forced to issue Executive Order 9022 in 1942. Miné was required to report for an interview that would lead to her eventual relocation in an internment camp: “As a result of the interview, my family name was reduced to No. 13660.” (pg 19 left below.) The Okubo siblings were then issued a number of tags to use for their belongings and themselves with this number.

They were scheduled to leave on May 1, 1942 for the Tanforan Assembly Center at the race track in San Bruno, California. At the camp they were assigned a former horse stall in a stable to use as their living quarters, with no privacy or conveniences (pg 35 below right.) It was here that Miné decided to use her talent as an artist to record the day to day life and small events in an internment camp. 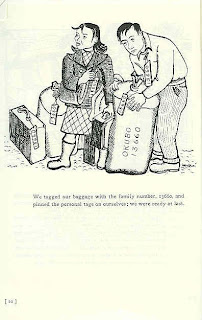 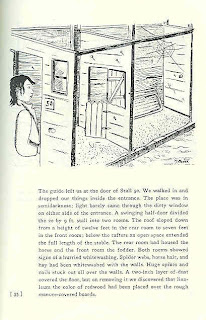 ﻿
﻿On September 16, 1942, Miné and her brother were relocated again, this time to the Central Utah Relocation Center called Topaz. Conditions here were somewhat better, and eventually restrictions were loosened making life more bearable until they finally left.

Citizen 13660 is the first personal account of what life was like for people in a Japanese internment camp. It was originally published in 1946, but went out of print in the 1950s when people wanted to forget the war. By the 1960s and early 1970s many Sensi, or Japanese-Americans who were born in the camps, were incensed about what had happened to their parents and grandparents and that it had all been forgotten, brushed under the rug, so to speak. Wanting to understand more about their historical past in the US, these students were a moving force behind the establishment of Asian Studies programs as part of many university curriculums. One of the results of this was a reprinting of Citizen 13660 in 1973 and again in 1983.

The structure of the book is similar to a picture book. Each page has one graphic with text below it. Each graphic is done in black and white, some are done in great detail, and others are simpler, while text can range from one line to very extensive. Miné is in every graphic, reinforcing the idea that she has witnessed what she draws and writes, and never relies on rumor or hearsay. The loss of her family name for a number sets the tone of this memoir, which is decidedly impersonal factual reporting. Aside from the author, the reader never learns the name of any other person not even that of her brother reinforcing the feeling of invisibility the Miné must have felt. Ironically, this objective technique proves to be a very effective style for conveying the feelings of the internees, their anger, confusion, disgrace, humiliation, injustice, loss and even patriotism, resulting in a very emotional document about this period in American history. It is not surprising that this technique works for her – Miné Okubo once described herself as “a realist with a creative mind.”

Miné Okubo passed away on February 10, 2001 and her obituary may be found at Miné Obuko; Her Art Told of Internment

This book is recommended for readers aged 12 and up.
This book was borrowed from the Hunter College Library.

For those who don’t know about Classics Illustrated, they were a series of comic books, which were adaptations of classic literature. I remember using this one in 7th grade (the other one was Black Beauty; I did go back and really read The Red Badge of Courage, but not Black Beauty)