The Paper Girl of Paris by Jordyn Taylor 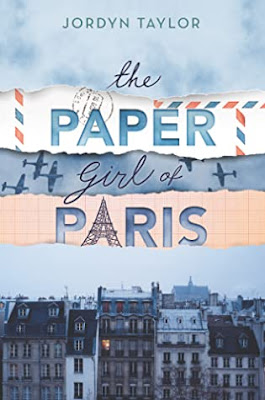 In this novel told in alternating voices, one in the present, one is the past, the lives of two teenage girls have interesting parallels.
No one was more surprised than 16-year-old New Jersey native Alice Prewitt to discover she had inherited an apartment in Paris' 9th Arrondissement from her beloved Gram, Chloe. Surprised because it is an apartment that had oddly never ever been mentioned, not to Alice, nor to Gram's daughter, Alice's mother. And it's not just any apartment, as Alice, her mom and dad discover, but what turns out to be a virtual time capsule of her Gram's family from the 1930s and 1940s. And the surprises don't stop there.
Going through some old photos in the apartment, Alice discovers that her Gram also had a sister named Adalyn Bonhomme that no one knew about. But why had Gram never mentioned a sister or the at-one-time-so-elegant apartment? Returning to the apartment a few days later to do more exploring, Alice is excited to find Adalyn's diary which she had begun on May 30, 1940. Writing about the Nazi occupation of France, Adalyn sounds ready to resist however she can.  But when Alice finds some magazine clippings with happy pictures of Adalyn dressed in high fashion and partying and a newspaper photo to her sitting in an expensive restaurant with six men wearing Nazi armbands, she finds her discoveries hard to process. Could Adalyn have been a Nazi collaborator?
Yet, the deeper Alice digs into the lives of the Bonhomme family during the war, the clearer a picture of a dysfunctional family emerges. Adalyn and Chloe's father is a WWI veteran who suffers from PTSD, has basically withdrawn from life, and everyone must tiptoe around him so as not to upset him. Their mother is the image of privilege, buying costly rationed items on the black market, and attending society parties. The two sisters are very close, but as Adalyn's wartime resistance activities increase, she worries that Chloe's outspokenness and her distain for the Nazis will jeopardize the family. Meanwhile, she finds herself very attracted to Luc who is the leader of her resistance group, and who doesn't seem to feel the same attraction for Adalyn.
Alice's family is just as dysfunctional. The family tiptoes around Alice's mother's depression.  It's understandable that she would be depressed after just losing her mother, and then discovering the Paris apartment was left to her daughter instead of her, but it's also clear she has been depressed off and on Alice's whole life. I thought her father was kind of passive, content to wait out his wife's depressions, not wanting to upset her and waiting for her to ask for help, which she never does. As Alice says her "family's first language is small talk" so important issues are never addressed. Sadly, he doesn't seem to see what this is doing to Alice. Alice retreats to a cafe to do her family research,where she meets her love interest Paul, a student and aspiring artist.
I really wanted to like The Paper Girl of Paris more than I did. But I felt there was just too much going on and it began to feel chaotic. I would have loved a story about Adalyn, her family and her resistance work. I really liked all of the historical elements in Adalyn's part of the story and how the diary gives a nice picture of life, which is then expanded in Adalyn's own narration. I think that these two things easily could have been presented without Alice's intervention.
So I'm sorry to say that I could have lived without Alice's story all together. She just wasn't as compelling a character as Adalyn. I thing Alice's story would make a nice novel about a contemporary girl dealing with a passive father and depressed mother. Her character turns the book into something of a mystery that needs solving, but it could have just as easily unfolded with that. I just felt that in The Paper Girl of Paris, she added nothing beyond being a plot device to get to Adalyn's more interesting story and her narration felt intrusive.
Should you read The Paper Girl of Paris? Yes, if you like historical fiction wrapped in a mystery.
This book is recommended for readers age 13+
This book was borrowed from the Queens Public Library
Posted by Alex at 12:14 PM