Village of Scoundrels written and illustrated by Margi Preus 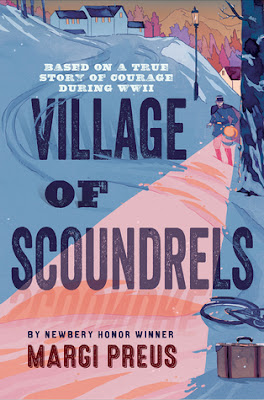 It's December 1942, and Inspector Perdant has just arrived in the small mountain village of Les Lauzes, located in southeastern Vichy France, and not far Switzerland's border. Officially, Perdant's job is to "maintain positive relationships with the locals," but unofficially, he understands his job is "to identify evidence of illegal activities and unregistered Jews, foreigners, communists, and undesirables." (pg 38)

No sooner does Perdant settle in than he takes an immediate dislike of the teenagers who sled at high speeds through the village's main street at night. And as Perdant begins to observe the comings and goings of village residents, he becomes increasingly suspicious of these teens, convinced that they are up to something and there are Jews sheltering among them and that the villagers are in on it.

And indeed, Perdant's suspicions are correct. In the center of Les Lauzes is a high school that is "meant to 'promote peace and international unity' and attracts teens from all over France, many of whom live in different boardinghouses in the village. Les Lauzes is a village full of secrets, and these teens attending school are part of that. Living in a boardinghouse named Sunnyside is an expert Jewish forger of documents, ration books, and identity cards who turned himself into Jean-Paul Filon, 17, and whose base of operations is the barn of Monsieur Mousset, a farmer. Jean-Paul often works with siblings Sylvie and Léon. Into Jean-Paul's life comes Jules, a 10-year-old goatherd who knows the mountains around Les Lauzes better than anyone and who offers his services as a delivery boy of forgeries.

Then there is red-headed Philippe, a Boy Scout with survival training, who escorts people escaping the Nazis through the mountains and across the Swiss border. Not well known among the teens, Philippe sleeps by day, and travels by night. Celeste, a wealthy girl from Paris, thinks she is too scared to be of any help to the resistance until she is asked to take a risky trip to deliver a message for the maquis.

In mid-December, the Gestapo arrive in Les Lauzes, taking up residence in a hotel right next to the Beehive, as boardinghouse with twenty children living there, most of them Jewish, including teenage Henni, as is the director of that residence. Most of the  children there, including Henni, were released from Gurs, a concentration camp in southwestern France.

This is a character driven story and is told from alternating points of view, including Pendant. The characters are all based on actual people, with the exception of Jules. One of the things I liked is the inclusion of a mystery woman with a limp who carries a suitcase around with her and sometimes herds the goats. The implication is that she is Virginia Hall, an American spy. I also feel that the village of Les Lauzes is itself a character in its own right, and is based on the real village of Le Chambon-sur-Lignon.

And into this mix of characters, Margi Preus weaves a fictionalized story of resistance, courage, cleverness, community, and danger, all of it based on real people and true events in the face of Nazi occupation. What makes the resistance activity work is that nearly everyone in the community is involved, including ordinary citizens, pastors, farmers, teachers, families, and of course, the teens, just as it was in reality.

Preus has included a Pronunciation Guide of names and places used, and back matter includes an extensive Bibliography. But most interesting of all is her Epilogue. Here she documents the actual people that her characters are based on and what happened to them after the war, as well as information about the actual places included in the book.

There are illustrations done by the author, but I read an EARC and never saw the final art so I don't feel I can comment of them. That aside, Village of Scoundrels is an exciting, well-written work of historical fiction about a different aspect of the French Resistance.

This book is recommended for readers age 11+
This book was an EARC gratefully received from NetGalley
Posted by Alex at 8:44 AM