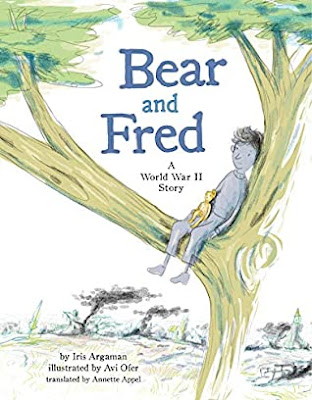 Children often pick a loved object that becomes their best friend, something safe and comforting that can help them through difficult and stressful times. That is certainly true for young Fred, growing up in Delft, Holland. Based on a true story, and set during WWII and the Nazi occupation of Holland, Bear and Fred tells the story of young Fred Lessing's experiences and survival during the Holocaust and is told entirely from the point of view of his beloved bear.

Fred has always loved his little yellow teddy bear, who was never given a proper name, even after a dog attacks it, ripping off one ear and causing his head to wobble.

And bear is there the night, just after Fred's parents tell him that he would be going to Amsterdam to live with his grandfather, that the family is warned to leave their home and go into hiding immediately. Fred doesn't understand what is happening, or why he is told to never tell anyone where he is from or who he is, but at least he has his teddy bear. Fred is happy to see his grandfather, until he realizes his parents won't be staying. But after his grandfather sews a yellow star onto his clothing, Fred's mother returns, rips the star off and takes Fred away to live with a stranger and once again his mother must leave.

Bear and Fred begins with a Prologue and Epilogue explaining how and when Fred's bear ended up in Jerusalem, at the Yad Vashem, the World Holocaust Remembrance Center in Israel. In between, the story explains why Fred's bear is so important to them. As Fred put it: "...[bear] had an important mission - to go to Israel to be part of an exhibition with other toys from the Holocaust, and there he would tell our story to children who would come to visit..."*

Bear and Fred is a particularly gentle, yet compelling Holocaust picture book. Nowhere are the Nazis mentions, nor are their abuses highlighted. But Fred was only 4-years-old when Holland was invaded by them, and six when his family was warned of a pending roundup. Iris Argaman has really captured how his feelings of confusion and fear are based on the behavior of people around him and things he is told. Having Fred's bear narrate provides just the right insight needed to keep this about Fred and not the world around him.

The story was originally written in Hebrew, and the translation is seamless and accessible, yet loses none of the poignancy, and I have to say I found myself tearing up while reading.

The digitally rendered line illustrations are in complete harmony with the text. The simple images before and after the Holocaust are done in subtle colors, while the years during WWII are done in a palette of grays with touches of yellow, an interesting artistic statement (particularly interesting to me because when I was young, I always imagined those years in black and white, as though color and sunshine couldn't exist then).

The author has included a short Historical Note at the front of Bear and Fred and back matter consists of a letter written to young readers from Fred's Bear, and an informative Author's Note about how this story came to be written.

Bear and Fred is a richly expressive picture book for older readers, touching on themes of friendship, loneliness, family, and love.

* This quote came from an article published by Yad Vashem entitled BEAR, about Fred and his best friend. You can read it HERE.

This book is recommended for readers age 7+
This book was gratefully received from Blue Slip Media
Posted by Alex at 1:00 AM