One thing about sheltering in place because of the coronavirus is that it gives me time to go through things and get a little more organized. This week I spent time organizing and cleaning out my digital files for The Children's War and found a bunch of things I'd saved for future posts and forgotten about. One of the subfiles I went though was called "Snoopies." When I originally began this blog, Snoopy was my avatar and muse, and I posted a few strips that Charles Schulz wrote to commemorate D-Day, the WWI Christmas Truce, and Veterans Day.

The Peanuts comic stripe explored lots of themes that Schulz returned to again and again, and one of those was Snoopy as his alter ego, the WWI flying ace, sitting in his Sopwith Camel (the red roof of his dog house), flying into battle in search of his nemesis the Red Baron, whom readers never see and whom Snoopy never defeats. The World War I flying ace appeared for the first time in the Sunday Funnies on October 10, 1965 with the following strip: 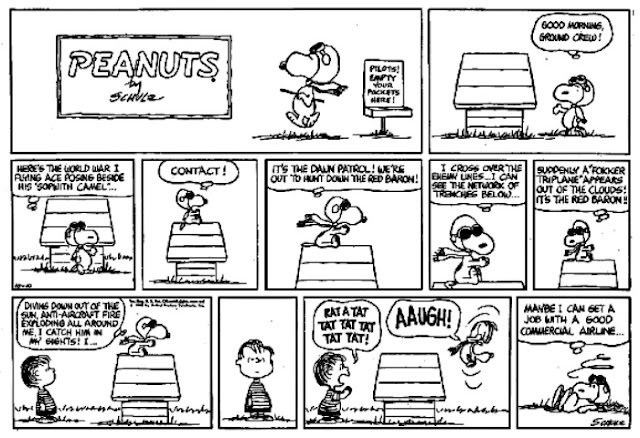 Snoopy and the Red Baron became so popular that just a little over a year after this strip was published, in November 1966, an English group called The Royal Guardsman recorded an album dedicated to these enemies. 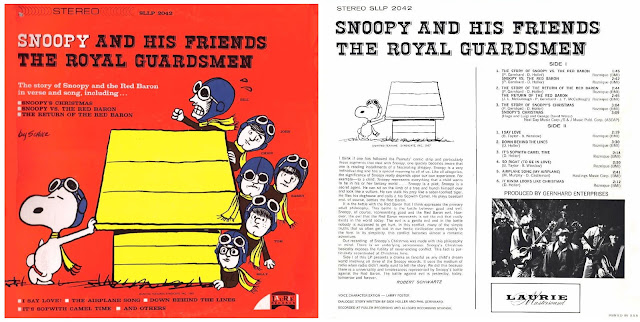 Most of us are probably familiar with the song "Snoopy's Christmas" but if you are curious about the other tunes included on this album, you can listen on Spotify or YouTube Music.

Well, back to organizing and getting the piles of books on my floor back on the shelves in some order. How are you spending your time at home?
Posted by Alex at 9:48 AM