They Went Left by Monica Hesse 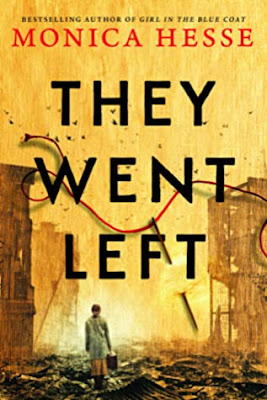 It's August 1945 and Zofia Lederman, 18, has been recently liberated from Gross Rosen Concentration Camp. She is recovering at a hospital, but is determined to return to her family's home to Sosnowiec, in what had been Poland before the Nazi invasion in 1939. After all the Jews there were rounded up, the Lederman were ultimately deported to Auschwitz. Only Zofia and her younger brother Abek, survived the selection process upon arrival, both ending up in Birkenau. Before they were separated, Zofia promised Abek she would find him at the end of the war.

Zofia is convinced that Abek is still alive and waiting for her at home. But home is no longer home, taken over by squatters and ransacked. And Abek isn't there, nor has he been seen in Sosnowiec since the war ended. Here, however, Zofia learns that prisoners from Auschwitz-Birkenau had been sent to either Bergen-Belsen or Dachau. And so early one morning, Zofia leaves Sosnowiec with some stolen money, a small suitcase and goes in search of Abek.

Arriving in Munich, Germany in September, Zofia finds her way to Foehrenwald, an adults only displaced persons camp. Since Abek would only be 12 by now, there is no chance of finding him in there. But Zofia is give a bed in a cabin with two other girls - Breine and Esther. And she meets the reclusive, angry Josef, to whom she feels a compelling attraction, and who eventually becomes her lover.

Though at first standoffish, Zofia slowly begins to settle into life at Foehrenwald. Thanks to her family's prewar business making fashionable custom clothing for women, Zofia's is an experienced seamstress and finds a purpose in the camp altering clothing for the women there, including a wedding dress. And just as she begins to come to life again, a boy claiming to be Abek shows up at the camp looking for Zofia.

There are several mysteries woven into Zofia's story, which begin to become apparent as she replays memories about her family, the roundup that ultimately brought them to Auschwitz, the selection process in which she and Abek were sent to the right, her dreams about the last time she saw him, her single-minded need to find him now and to finally be able to go home. This is all described in some of the most heartrending prose I've ever read:


"And when we got to Birkenau, there was another line dividing into two. In that line, the lucky people were sent to hard labor. The unlucky people - we could see the smoke. The smoke was the burning bodies of the unlucky people.
On this continent, I need to find only one person. I need to go home. I need to survive. I need to keep my brain working for only one person.
Because everyone else: Papa, Mama, Baba Rose, beautiful Aunt Maja - all of the, all of them, as the population of Sosnowiec was devastated - they went left." (pg. 14)

As Zofia begins to feel alive again in Foehrenwald, she also begins to unravel the mysteries hiding in her own memories, as well as truth hiding in the enigmatic Josef. Against this, Hesse provides the reader with a very realistic picture of what life was like in a displaced persons camp after the war ended. She has really captured the chaos of so many people looking for loved ones whom they had been separated from and now hoped had also survived life in concentration camps, like Miriam. She and her twin sister were victims of Nazi experiments, now she obsessively writes letters in the hope of finding her sister. And as Zofia discovers, anti-Semitism didn't stop just because the war ended. But Hesse also shows the kindness of people, like Sister Therese at Kloster Indersforg, a displaced persons camp for children, who gives Zofia just enough hope that Abek is alive to keep her going.

While Zofia looks for Abek, Hesse interrogates the idea of what home will be to people who have lost everything and almost everyone that they had identified as home before the war. Just before the Lederman family was rounded up, Zofia had embroidered the story of their family in alphabet form and sewn it into Abek's jacket, so he wouldn't forget. In one of her dreams, Zofia tells Abek: "When I find you again, we will fill our alphabet. And we will be whole, and everything will be fine. I promise I will find you." (pg. xiv) As Zofia rewrites this alphabet in a post war world, it looks very different, but will it become her way to find a new home and rebuild her family?

That being said, no one was more surprised than I was when I got the the end of The Went Left and the mysteries were solved. I did not expect what I read.

They Went Left is a book everyone should read.

You can find a great discussion guide provided by the publisher, LittleBrown, HERE

This book is recommended for readers age 13+
This book was an EARC gratefully received from Edelweiss+
Posted by Alex at 11:37 AM