My Survival: A Girl on Schindler's List, A Memoir by Rena Finder with Joshua M. Greene 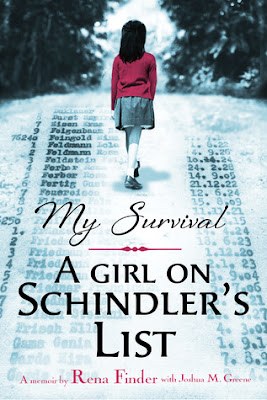 Like most Americans, I first learned about Oskar Schindler and the 1,200 Jewish lives he was able to save watching Steven Spielberg's movie Schindler's List. And yes, I am sorry to say I have not yet read Thomas Keneally's 1982 book Schindler's Ark (published as Schindler's List in the US). However, you may recall a book published in 2013 called The Boy On the Wooden Box by Leon Leyson, who was a young Jewish boy working for Schindler. Now, we have this book by Rena Finder, who was a still a young girl when she was working for Oskar Schindler.

Rena, who maiden name was Ferber, had lived a pretty happy and comfortable life in Krakow, Poland with her parents Moses and Rosa Ferber. But all that changes in 1939 when the Nazis march into and occupy Poland and World War II begins. First, friends and neighbors begin to turn their backs on their former Jewish friends, and Krakow's Jews are faced with more overt acts of anti-Semitism, even as more and more restrictive laws are imposed by the Nazis. Jews are not longer allowed to go to school, the park, the movies, they are subject to a curfew, and forced to wear a blue and white armband with a Star of David on it signifying that they are Jewish. And soon enough, arrests and deportations of Jews to concentration camps begin.

In 1940, Rena and her parents are issued permits allowing them to remain in Krakow while her father works, but they are forced to leave their lovely apartment and move into the Krakow ghetto - 320 apartments for 3,000 people. Then, on December 31, 1942, Rena's father is arrested despite having a work permit. Sadly, Rena will never see her father again.

Not long after her father's arrest, liquidation of the Krakow ghetto begins and the ghetto's Jews are forced to march to Plaszów Concentration Camp, a march that includes Rena and her mother Rosa. There, they both end up working in Oskar Schindler's factory, a factory that had originally been located near the Krakow ghetto, where he could use cheap Jewish labor. But now that his labor was in Plaszów, they would have to walk 2 1/2 miles each way to get to and from work. Schindler convinces Plaszów's Commandant, Andrew Goeth, to allow him to build a subcamp for the factory's Jewish workers. Amazingly, Goeth agrees to allow this.

Rena's story is told in a very matter of fact way in the first person, but also in a very intimate voice that makes you feel that she is speaking directly to you, the reader. I've given you most of the historical background, but her story is naturally much more personal, recounting what life was life for Europe's Jews under the Nazis, including the fate of some of her family and friends. She also talks in harrowing detail what it was like when she and the other people working for Schindler were sent to Auschwitz-Birkenau in 1944. Luckily, Schindler was able to reclaim them thanks to his list of workers and take them to his new factory in Czechoslovakia. And unlike many real life Holocaust stories, Rena also talks about what her life was like after the war, meeting her husband and moving to America.

My Survival: A Girl on Schindler's List is a very accessible, age appropriate book, perfect for introducing young readers, and especially reluctant readers, to the Holocaust. Rena breaks down the different events on her personal life and how she was impacted by the things done to Jews under the Nazis. The pages of photographs of the Ferber/Finder families at the back of the book makes her story that much more real. Rena's "Closing Thoughts" bring the past into the present with her plea for today's youth to stand up for those people who are being targeted now, reminding us that genocide begins when people begin turn their backs on what is happening to others.