Room for One More by Monique Polak 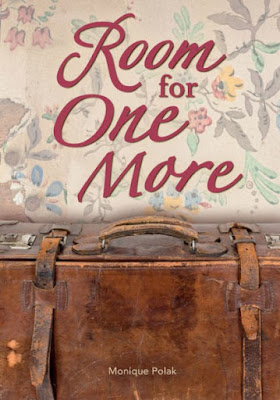 It's 1942 and there is nothing Rosetta Wolfson, 12, likes more than eavesdropping in on a good conversation. So when a man named Mr. Schwartzberg arrives at the Wolfson home in Westmount, a small suburb of Montreal, Canada, Rosetta is right there hiding behind the overhang of the dining room tablecloth. And what she overhears will suddenly change the whole Wolfson family's - Mom, Dad, older sister Annette, 16, and young sister Esther, 6 - dynamic.

The Wolfson sisters are about the get a new brother, 16-year-old Isaac Guttman, a German Jewish refugee who had been part of the Kindertransport, was later interned by the British, and is presently living in a Canadian internment camp.  Coincidentally, while in England, Isaac had been supported for a while by the Wolfson's granny living in London.

It's decided that Isaac will be given Rosetta's room and she will move into Annette's room, an arrangement neither is happy about. Issac's presence, however, doesn't really upset the household very much and it doesn't take long for him and Rosetta to become good friends with each other. Of course, Mr. Wolfson is delighted with Isaac - here is the son he's always wished he had.

So far, the war in Europe has only been an inconvenience to Rosetta's life because of the rationing of things like sugar and butter. Little by little, though, Isaac begins to confide in her about his life in Germany and about his Tante Dora who raised him. But when Isaac gets a letter from Granny saying that his mother wants to reconnect with him, he becomes very upset. Eventually, Isaac tells Rosetta about his mother, who wasn't Jewish, and who, thanks to her perfect Aryan looks, became part of the Nazi regime teaching young girls how to be good wives and mothers, and to hate Jews. She even cruelly turned her back on him in front of her students, treating him as if she didn't know him. More curious than ever, Rosetta goes snooping in Isaac's personal things and discovers the yellow fabric stars that Jews are forced to wear in Germany.

Anti-Semitism isn't something Rosetta has really witnessed before, but then her best friend's older brother goes after Isaac with some vile remarks about being Jewish and letting him know he isn't welcome in Canada. Later, Rosetta learns that are quotas imposed on the number of Jews that can be admitted to McGill University's School of Medicine, the school Isaac is applying to. All of this opens Rosetta's eyes to just what is really happening to the Jews in Europe, and helps her accept Isaac as a brother not just a guest in the Wolfson home.

There are a number of things I liked about this book.

To begin with the title Room for One More could easily have been The Education of Rosetta Wolfson because that's really the main thrust of the story. Rosetta's life had been happy and sheltered, and she had yet to witness anti-Semitism. But it was there all along, it just needed a catalyst to bring it out - like Isaac, with his Jewish background and German accent. And though the story takes place over only 2 months, Rosetta learns life changing lessons about the importance of standing up for what is right. In reading Rosetta's story, I think young readers may also find many parallels between what was happening in 1942 and what is happening in today's world. It certainly resonated for me.

The anti-Semitic events in Germany are presented by Isaac in a very age appropriate way. They are factually correct and clearly painful to Isaac, but they are not graphically described, making this a good book to use for introducing the Holocaust to young readers.

I really liked the Wolfson's family dynamic. The sibling scrapes between Rosetta and Annette reminded me of sharing a room with my own older sister, right down to the line separating their space. And yet, they are able to put aside differences when they need to. I also thought that Rosetta's jealousy over the bond that formed between her father and Isaac was very realistic.

I didn't like that the author sporadically accented the way Isaac spoke. I found his saying things like vas der (was there),  or vent der (went there) to be distracting. All that was needed was an occasional mention that Isaac spoke accented English.

I also didn't like so many coincidences. One or two in a novel can feel believable, more than that is troublesome.

All in all, though, Room for One More is a welcome addition to Holocaust literature. It presents a warm, close-knit, happy Jewish family living in Canada, including traditions and inside jokes, and how one person changed their lives forever.  I would highly recommend this poignant, well told novel.

This book is recommended for readers age 9+
This book was purchased for my personal library
Posted by Alex at 10:35 AM