The Brave Cyclist: The True Story of a Holocaust Hero by Amalia Hoffman, illustrated by Chiara Fedele 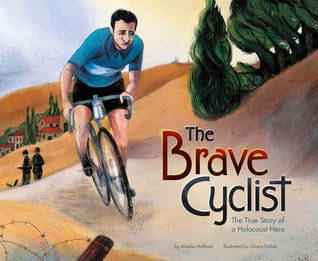 Sometimes the most unlikely people find themselves in a situation that calls for action and bravery and they rise to the occasion. This is certainly the case of Tour de France champion Gino Bartali.

Born in Florence, Italy, Gino was a small, sickly boy who found release riding a bike, even if it was a rusty second hand bike. Before long, he could outrace his friends, even those with better bikes. In sixth grade, Gino decided to learn more about cycling, and got a part-time job with Oscar Casamanti, a man who repaired racing bikes. When he was invited to ride along with some racers through the Tuscan hills, Gino persevered even as some riders dropped out. Casamanti was so impressed, he recommended Gino take part in professional races.

At 17, he began training and racing more, and by age 21, Gino had become a powerful, winning racer. In 1938, he participated in the Tour de France and despite having an accident during the race, he still managed to win. By now, Benito Mussolini had declared himself Il Duce, the leader of Italy and a ally of Adolf Hitler. Mussolini declared Jewish citizens to be enemies of the state. Kids could no longer go to public school, or play in public parks, and their parents lost their jobs. Many Jews were arrested.

Then, in 1943, Gino received a mysterious telephone call from the archbishop of Florence, Cardinal Elia Dalla Costa. Could Gino help them? Riding his bike, Gino became a secret courier for the cardinal - making a 110-mile trip to deliver papers, photographs, and identification papers to a printer in Assisi, Italy, who then created forged identification papers that would be give to Jews in the hope that the papers would save their lives.

Gino carried on this important work until he was arrested in 1944, accused of selling guns to Mussolini's enemies. Released after 3 days, Gino went into hiding for a few months, until August 1, 1944 when the war ended in Italy and Italians were freed from Mussolini's grip.

And Gino? He went back to training for bike races, even winning the 1948 Tour de France again.

The Brave Cyclist is such an important story, and yet, one very few people knew about until now. Gino's story is a particularly important one when you realize that the punishment for helping Jews in any capacity was death, and not just for the helper, but often for their family as well. But Gino's story is also an inspiring one that proves the even one person can make a difference, that resistance can change people's fate. And the whole time Gino rode his bike great distances, often being stopped and searched by soldiers, delivering documents to be converted into forged identification papers, he had to keep his activities to himself. He could not even tell his wife so that if they were arrested, she wouldn't know anything.

In addition to an accessible written biography, Chiara Fedele's affecting illustrations are done in bright hues reflecting the happy days of cycling and racing, then switch to mostly dark hues reflecting the dark times of Mussolini's reign, complimenting and enhancing the text.

The Brave Cyclist is a picture book for older readers that is sure to generate some wonderful discussions among young readers about what they might do if they found themselves in the same circumstances as Gino.

Author Amalia Hoffman has included an Afterword that goes into detail about Gino Bartali's life, and his heroic actions. In fact, she writes, that Gino was recognized as a Righteous Among the Nations by Yad Vashem in Israel, and what greater honor can there be but to be so acknowledged. You will also find an important Select Bibliography in the back matter for further investigation.

This book is recommended for readers age 8+
This book was provided to me by the publisher, Capstone Editions
Posted by Alex at 4:25 PM