A Place to Belong by Cynthia Kadohata 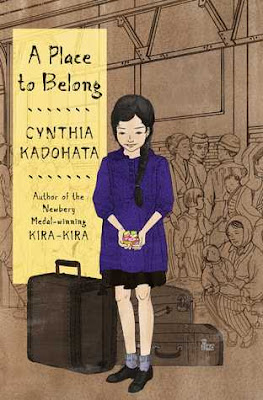 We always like to think that this country fought heroically in WWII but the truth is that this country didn't always act very admirably, and in fact, it sometimes acted down right unconstitutionally. Which is why, on Saturday, January 12, 1946, 12-year-old Hanako Tachibana, her brother Akira, age 5, and their parents have just arrived in Japan after a long journey from Tule Lake Concentration Camp in northern California.

Having lost their home, their restaurant, their possessions, even Hanako's cat, the Tachibana family were living in internment camps since 1942, after President Roosevelt had signed Executive Order 9066. They had ended up in Tule Lake in 1943 because Mr. Tachibana had refused to answer yes to one of two loyalty questions on a government questionnaire designed to separate loyal from disloyal Japanese American men. Ultimately, Hanako's parents decided renounced their American citizenship when pressed to do so by the government and the family was repatriated to Japan at the end of the war, a country neither Hanako nor Akira had ever been to before.

Hanako expects Japan to look as beautiful as it had in pictures she had seen, but the reality is a Japan that is as broken and poverty-stricken as she feels. Traveling to her paternal grandparents, tenant farmers living just outside of Hiroshima and struggling to survive, Hanako witnesses soldiers and civilians, dirty, disheveled, often crippled, begging for something to eat, as well as the destruction all around her, blackened trees, buildings and homes turned to rubble, all as a result of the atom bomb that had been dropped there by the Americans.

At her grandparents home, Jiichan (grandfather) and Baachan (grandmother) welcome the family with open arms and unconditional love, despite not even having enough to eat for themselves. Hanako helps out as much as she can working in the fields, but soon finds herself in school, where she is treated like an outsider. Although she can get by speaking Japanese, her reading and writing are almost non-existence, as is her skill using an abacus. Even her long braid is cause for criticism among the other girls.

Hanako is a sensitive, observant, questioning girl, who is growing up too quickly, but is stuck in the past and afraid of the future. One of the first things Jiichan teaches her is that the way to move forward is through kintsukuroi, which is a way of repairing broken pottery using lacquer dusted with gold, so the repaired pottery is even more beautiful than it had originally been. The trauma of having lost everything has caused Hanako to question who she is, where she belongs, and what she now believes in. She may feel like a broken piece of pottery, but Hanako figures life is more complicated than a repaired bowl.

Eventually, however, Hanako's parents decide that they would like to return to America and begin working with an American civil rights lawyer, Wayne Collins, to make that happen. Mr. Collins is putting together a class action suit to help those who were repatriated to Japan after the war to regain their citizenship and return to America. But when her parents petition is refused, the family is forced to make some hard decisions. Yet, through everything that has happened to her family, Hanako finally begins to understand her grandfather's lesson on kinsukuroi, and learns that in life gold can take many forms, and that understanding is just what she needs to be able to move forward with her life.

I won't lie, A Place to Belong is a difficult book to read. Not because of the writing, which is beautifully straightforward. Or the characters, which are drawn so well you feel like you really know them. What makes it difficult is the reality of what happens, and knowing that Hanako's life is broken because of war, because of who she is and what is done to her by her own country - the United States. In addition, descriptions of children and adults begging in the streets, of people starving and disfigured in the aftermath of the atomic bomb, of black markets taking advantage of desperate people offer a disturbing, yet realistic look at post-war Japan even as Hanako tries to piece together just who she is amid the wreckage within and around her.

A Place to Belong is historical fiction based on real events. All men of Japanese ancestry really were required to complete the so-called "loyalty questionnaire" in 1943 and they, along with their families, were sent to Tule Lake Concentration Camp if they were deemed disloyal based on their answers. Tule Lake was a harsh, cruel place where inmates were treated like prisoners and many, like Hanako's family, were deported to Japan after the war.

A Place to Belong should be read by anyone interested in WWII history, however, I think readers will definitely see parallels to much of what is happening in our world today. Be sure to read Kadahata's Afterword for more information about Wayne Collins and the work he did on behalf of wronged Japanese Americans.

You can download a reading guide for A Place to Belong from the publisher, Simon & Schuster, HERE

You might want to pair A Place to Belong with No-No Boy by John Okada. No-No Boy looks at the post-war life of a Japanese American boy who answered no to both of the loyalty questions, but did not give up his citizenship.

This book is recommended for readers age 10+
This book was provided to me by the publisher, Simon & Schuster, with gratitude