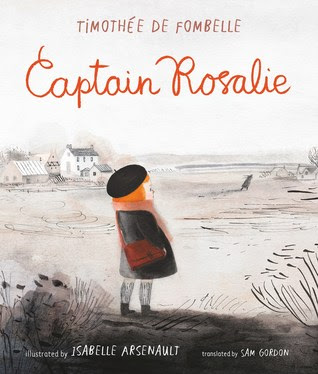 In this short novella, a 5½-year-old girl calls herself Captain Rosalie, thinking of herself as a soldier on a secret mission during WWI, spying on the enemy and preparing her plan of action. And she is sure that one day she will be awarded a medal for what she does.

Living in a small French village, Rosalie is really too young for school, but the teacher, a wounded war veteran, lets her sit quietly drawing in the back of his classroom every day while her father is away fighting in the war and her mother works in the factory for the war effort. Rosalie is given a notebook and pencils with which to draw. But since it contains her plan of action, she never, never leaves the notebook where it can be found.

At night, her mother reads letters from her father at the front, a father she has almost no memory of. Instead of writing about war, he writes about what they will do when the war is over, but Rosalie refuses to listen to her mother reading the letters.

Then one night, after Rosalie is in bed, there's a knock and she hears her mother speaking to the gendarme. The next day, there's a blue envelope on the table with a letter her mother doesn't read to her, nor is she able to look at her daughter. Rosalie knows something has changed, and her mission now becomes even more imperative.

Finally, on a day in February, it's time for Rosalie to carry out her secret mission. But first she must convince the teacher to let her go home to get her notebook. She is finally allowed to go, but is accompanied by Edgar, there only student who has ever noticed Rosalie. In the kitchen, Rosalie finds a box containing the letters from her father and her secret mission becomes apparent - Rosalie hasn't been drawing at the back of the classroom, she has been learning to read with the other students. And now, she can read the letters from her father well enough to realize they are about the horrors of war, not about what they will do when he comes home. But one letter, the last on brought by the gendarme, is missing.

Now, Rosalie will have to come up with another plan to find that letter and learn the final truth that has been withheld from her. Luckily, Edgar is just the kind of friend who will help her accomplish her mission.

Captain Rosalie is a beautifully crafted novella that is at once heartbreaking and hopeful. There are no unnecessary words or wasted actions and yet it packs such a strong emotional reaction. de Fombelle brilliantly holds the mystery of Rosalie's secret mission until it is time to reveal it, yet upon rereading, I noticed subtle hints. Narrated by Rosalie, author de Fombelle and translator Gordon never lose the voice of a 5½-year-old as she plans her mission and closely watches the world around her. Her realistic voice is even there when she is reading the letters from her father, not knowing all the words, but knowing enough to understand what her father is saying.

Interestingly, while her mother made up letters that she thought would make Rosalie's father more real for her daughter, and ignoring the truth of what he actually wrote, this only served to make Rosalie more distant from him and inspired her to learn to read. And, it doesn't take much to figure out that the gendarme brought news that Rosalie's father was killed in action. But that isn't what the story is about. It is about adults telling kids the truth so that they don't have to find it out for themselves.

Arsenault's spare watercolor, pencil and ink illustrations are done in cold, barren winter grays and whites, with only touches of color - red hair for Rosalie, her mother, and her ally Edgar, and the flames of a fire, and the blue of the envelopes and letters from Rosalie's father add to the feeling of life and hope in the midst of death and despair.

If Captain Rosalie sounds familiar, it is because it was originally published in an anthology called The Great War: Stories Inspired by Items From the First World War. The stand alone version of Captain Rosalie will be available on June 11, 2019.